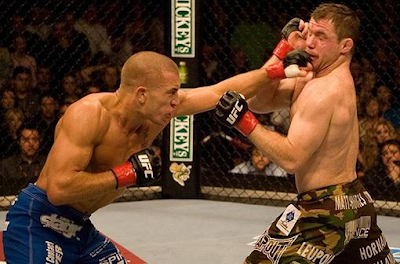 As dominant as Georges St-Pierre has been serving as UFC welterweight champion, he’s also taken his fair share of lumps regarding how he’s been winning recently.
While compiling an impressive 20-2 professional record, GSP has solidified himself as one of the best pound-for-pound fighters on the planet.


It wasn’t too long ago when St-Pierre was considered a lethal striker, but since being knocked out by Matt Serra at UFC 69, he’s gone with a more conservative, yet dominant, approach inside the Octagon.


St-Pierre has said in the past he would prefer a higher knockout percentage on his resume, however it’s not always that simple.

“The truth is, sometimes the line, it’s only a tiny line between a finish and a good win and a decision,” the French-Canadian said while appearing on MMA Live.


In his most recent title defense against Dan Hardy at UFC 111, the champ didn’t give his challenger a chance to land a shot, as the Brit was on his back early and often. Although he tried valiantly to finish Hardy off, GSP was forced to settle for his third unanimous decision in four fights.


“I did a little mistake that let [Hardy] escape the armbar, but if I would’ve closed the deal nobody would’ve said nothing and it would’ve been a good victory,” St-Pierre continued.


“It’s very hard because I always have to do better than my previous fight and you can’t always win by knockout or submission.”
GSP’s next challenger will be a familiar foe in Josh Koscheck. St-Pierre handed the controversial wrestler a unanimous decision loss at UFC 74.


The pair will meet once they’ve fulfilled their duties as opposing coaches on next season’s “The Ultimate Fighter,” an event likely to land in December.
by Tim Ngo
May 12th, 2010