Getting to know the cast of ‘The Ultimate Fighter’ 13 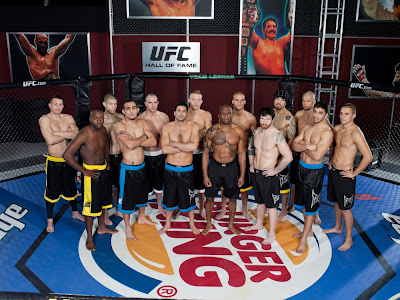 Fourteen welterweights battle to become The Ultimate Fighter
When Brock Lesnar and Junior Dos Santos arrived in Las Vegas to begin their stints as coaches on “The Ultimate Fighter,” many questioned how they would connect with the cast of 14 UFC hopefuls.

Lesnar, the former UFC heavyweight champion and WWE personality, is notoriously standoffish when it comes to relationships, keeping more feuds than friends. Although Dos Santos — the Brazilian top heavyweight contender — is known as a pleasant guy, he barely knew any English when he showed up on the set in January.

But both Lesnar and Dos Santos spoke positively of the experience and their welterweight trainees three months later.

“Looking back to the beginning of the show, I was very hesitant because I didn’t want to get out of my comfort zone too much,” Lesnar said on a conference call this week. “But we had a great group of guys. It was a great opportunity for me.”

The 13th season of “TUF” debuts at 9 p.m. today on Spike and runs through June 4, when a new champion will be crowned and awarded a six-figure UFC contract at the finale fight card at the Palms.

According to Lesnar and Dos Santos, whoever wins will have navigated their way through a talented field. 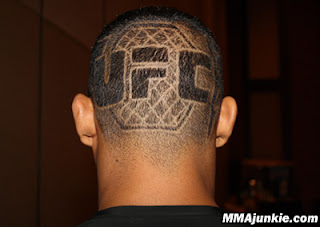 “They all knew what they were doing,” Dos Santos said through a translator. “It was good to be able to pass on my experience and work with them every day.”

Below is an introduction to each of the 14 fighters who make up the cast of this season’s “TUF”.

Fighting Out Of: Dusseldorf, Germany

Bio: Asrih takes pride in being named the first German to ever appear on ‘TUF’. He’s also the oldest member of this season’s cast. Asrih has worked as a trainer and owns his own facility, named Pride Gym, in Germany. He’s adept in both wrestling and jiu-jitsu but has only tallied one knockout in his five-year professional career.

Fighting Out Of: Indianapolis

Bio: Bailey went to school to become a Baptist minister and his father is a pastor. Many people in Bailey’s life were upset with his decision to turn to MMA full time. But Bailey said he learned to love the sport through training with a handful of UFC competitors including "TUF" alums Chris Lytle and Matt Mitrione.

Fighting Out Of: Olympia, Wash.

Bio: Bentley’s record may not look as impressive as the rest of the cast, but that’s largely because he’s faced better competition. Bentley has professional fights on two M-1 cards and a Strikeforce Challengers event. He also has a defeat to "TUF" season 12 veteran Cody McKenzie. Bentley thinks his experience gives him an edge over the rest of the cast.

Fighting Out Of: Liverpool, England

Bio: Wolfslair MMA Academy has already produced one "TUF" champion in Michael Bisping, who won the light heavyweight competition in the third season. Bowman hopes to make it two. In addition to Bisping, he also trains alongside former "TUF" coach Quinton “Rampage” Jackson and UFC veteran Cheick Kongo. He had no background in any martial arts before beginning to train four years ago.

Fighting Out Of: Moultrie, Ga.

Bio: Unlike most of his castmates, Caldwell still holds a full-time job in addition to training in MMA. He has to balance working 10-hour shifts as a roofer with his fighting career. All things considered, Caldwell has caught on to MMA quickly. He discovered MMA less than four years ago and never fought as an amateur.

Fighting Out Of: San Diego

Bio: Cope works in a law office and would eventually like to become a lawyer and compete in MMA simultaneously. He earned his degree from the University of California Santa Barbara. Since then, he took a traditional route and learned each martial art one by one. The highlight of his three-year professional career before "TUF" was a knockout victory on a Strikeforce card.

Fighting Out Of: Rockville, Md.

Bio: Davis earned a criminal justice degree from the University of Maryland but trained in MMA all through college. He thought his fighting career had come to a premature end two years ago when he tore his retina. But doctors eventually cleared him to fight and he came back with a submission victory last November after 22 months without a bout.

Fighting Out Of: Ventura, Calif.

Bio: Athletics are all Ferguson has ever known. He was a three-sport athlete in high school and wrestled in college at Central Michigan and Grand Valley State. Ferguson got into MMA because he felt it was the only way for him to become a professional athlete. He won a championship in the California-based PureCombat promotion before accepting his invitation to appear on "TUF".

Fighting Out Of: Marietta, Ga.

Bio: Harvison loves to brawl and sees no reason for hiding it. He says his favorite things are hitting people in the face and getting hit in the face. In addition to MMA, he’s 4-0 as a professional boxer and interested in pursuing a boxing career overseas if his UFC opportunity doesn’t work out. None of his seven MMA fights have gotten out of the first round.

Fighting Out Of: San Diego

Bio: Jury is one of the youngest fighters on the show this season, but he’s not at a disadvantage when it comes to experience. Jury started training in mixed martial arts at 13, had his first professional fight at 16 and became a full-time fighter at 19. He’s finished all nine of his professional fights — five by submission and four by knockout.

Fighting Out Of: Edmonton, Alberta, Canada

Bio: Six years ago, McGillivray weighed 260 pounds. He broke his back when he was 16 playing lacrosse and couldn’t partake in any athletics for two years. When he was healthy enough to compete again, McGillivrary longed for something new to try out and found himself at an MMA gym. He’s won nine of his 11 professional fights by submission.

Fighting Out Of: Orem, Utah

Bio: Nijem followed the path of many college wrestlers by turning to MMA after graduating. Nijem wrestled at Utah Valley University and got a business administration degree there. One of his training partners and mentors is Court McGee, who won the 11th season of "TUF." The one loss on Nijem’s record could be deceiving because it was in his first fight, which he took without ever training in MMA.

Fighting Out Of: New Orleans

Bio: Rader was a former standout high school wrestler and personal trainer four years ago before he decided to pursue MMA full time. He fought as an amateur before that but never took it too seriously and said his bouts were sporadic. He enters "TUF" on a five-fight winning streak, including two victories on Bellator Fighting Championships shows.

Fighting Out Of: Las Vegas

Bio: On paper, Torres appears as one of the favorites on "TUF" this season. He’s well-rounded as a fighter as his last two victories have come via submission, but he’s also undefeated at 9-0 as an amateur boxer. He works with renowned striking coach Shawn Tompkins locally. He immigrated from Mexico a few years ago to assist his family financially. 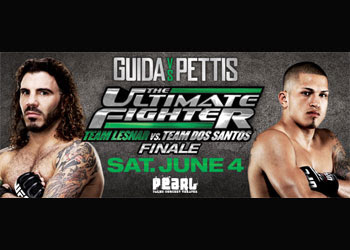