Menu
Home » »Unlabelled » MMA: It only gets better for AFC, April 2 event

MMA: It only gets better for AFC, April 2 event


It was never easy for the men behind the Armageddon Fighting Championship. With this week’s news mixed martial arts leaders UFC is returning to Vancouver on June 11, it’s nice to know AFC has a high-powered teammate in the ring, even if it’s not in their corner.

UFC’s return is one week before AFC 6, June 18 at Bear Mountain Arena.

“UFC does nothing but grow the sport by getting to their fans,” Jason Heit said.

As he is with every AFC event, Heit, the AFC originator with Darren Owen, will be front and centre at this Saturday (April 2) night’s event, AFC 5: Judgement Day, at Bear Mountain Arena in Colwood.

The two worked endlessly for years to get to this point, now they're hoping to expand even further throughout B.C. and Canada. The impact of the UFC getting MMA approved in Vancouver for last year's event and, the awareness UFC brings to the sport in this province is helpful, Heit said.

AFC treaded new territory in November with its first female fight. This time around its breaking ground again.

Kaufman, the highest-profile local fighter is a former Strikeforce champion. Despite that she’s struggled at times to find opponents to fight. A win could mean her return to Strikeforce, the top MMA platform for women’s fighting.

“We’d definitely be happy to have Kaufman back,” Heit said.

“It will be interesting to see what happens with Strikeforce now that UFC has bought it.”

Eager to branch into the female market, AFC joined the Groupon craze with ticket deals for AFC 5. “Groupon is quite a different demographic. It’s 77 per cent female, far beyond our traditional market.”

Heit said they still have the elements that have made AFC so successful this far. Returning for his fifth AFC fight is Nanaimo’s Nick Hinchliffe (17-7). The man with the deadly right hand is looking for his fourth AFC win against Ryan Machan (12-6) in the 170-pound category.

For those who appreciate an old-style striking session, Heit points to the fight between David Perron (4-0) versus Andrew Buckland (12-8) as a battle in the making. “Those are two guys who will go to war. They like to bang it out on their feet.” 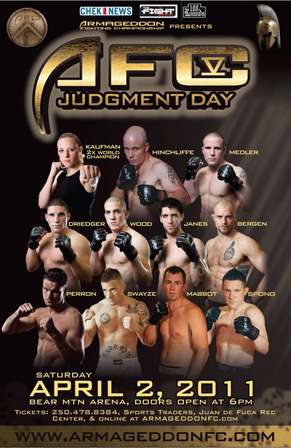 Tickets available at the door and online at armageddonfc.com. Doors at 6, fights at 7 p.m.