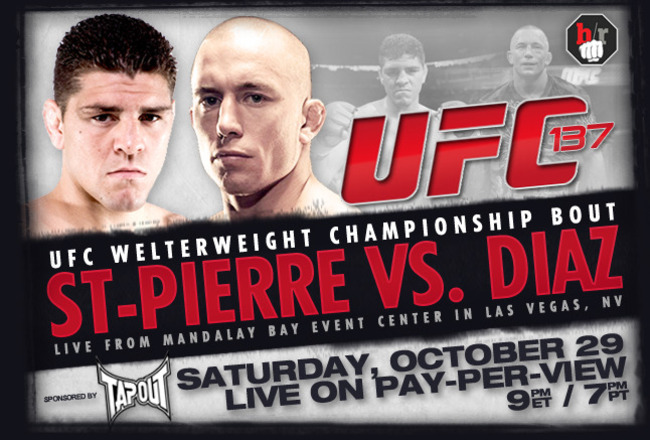 UFC president Dana White made the news official on Wednesday afternoon through his Twitter account, saying, "U wanted it! U GOT IT!!!" White said the fight will take place on Oct. 29 at the Mandalay Bay Events Center in Las Vegas for what will be UFC 137.

St-Pierre defended his title with a unanimous decision victory over Jake Shields at UFC 129 in Toronto at the end of April. After the post-fight press conference, White talked about potential interest in a GSP-Diaz bout with a small group of reporters. And fans and analysts have been calling for it ever since.

Through the last month, White has been insistent that there have been obstacles in the way of Diaz simply coming over to the UFC to fight St-Pierre. And one of those obstacles was Diaz saying he was interested in trying his hand at boxing – even hooking up with a promoter before pulling back and deciding to stick with MMA.

White met with the Strikeforce champion, who after a TKO win over Paul Daley in April seemed to have run out of challenges in the promotion, which is now owned by the UFC. White and the UFC needed to clear the hurdle of Diaz's Strikeforce contract – and there have apparently been enough inroads made for White to make the fight announcement.

The initial announcement leaves several questions lingering, though. White was not immediately available for comment on what Diaz's return to the UFC means for his Strikeforce welterweight belt and how the promotion will fill it, assuming he vacates the title.

But Diaz's manager, Cesar Gracie, told MMA Fighting's Ariel Helwani on Wednesday that under Diaz's new multi-year, multi-fight deal, Diaz will also be able to return to fight for Strikeforce – though Gracie said if that were the case, it would likely mean he would have lost to St-Pierre.

One of the initial barriers, White said, in Diaz coming to the UFC was Strikeforce's deal with the Showtime premium cable channel, which broadcasts the promotion's events. White said on Saturday after UFC 130 in Las Vegas that Diaz's Strikeforce deal wasn't a "Showtime contract," per se. But he has indicated throughout the last month that the Strikeforce-Showtime deal did present a hurdle the UFC would have to cross to make the superfight with St-Pierre a reality.

St-Pierre (22-2, 16-2 UFC) had his streak of 30 straight winning rounds snapped by two of the judges in his win over Shields in Toronto. But he has remained the most dominant champion in the sport the last three years. Since winning the UFC 170-pound title back from Matt Serra at UFC 83, the Montreal native has defended it six straight times against Jon Fitch, BJ Penn, Thiago Alves, Dan Hardy and Shields. After winning the belt the first time, against Matt Hughes at UFC 65, St-Pierre lost it to Serra in his first defense in what is regarded as arguably the biggest upset in the sport's history. But since then, GSP has been unstoppable.

Diaz (25-7, 1 NC, 6-4 UFC) returns to the promotion for the first time since UFC 65 in November 2006. Since leaving, he has gone 11-1 with wins in the now-defunct EliteXC, Dream and Strikeforce. He took the promotion's welterweight title from Marius Zaromskis in January 2010 and has defended it three times with wins over KJ Noons, Evangelista Santos and Daley.

Diaz joins his brother, Nate, in the UFC. Nate Diaz was the Season 5 lightweight winner of "The Ultimate Fighter." Last year, Nate moved from lightweight to welterweight. He has lost two straight unanimous decisions, but prior to that slide he won six UFC post-fight bonus awards in eight fights. When he moved to welterweight, he indicated he would like to fight in both weight classes. His brother's return to the UFC might force him back to lightweight.

St-Pierre is currently regarded as one of the top two pound-for-pound fighters in MMA, most often flip-flopping the No. 1 or No. 2 spot with UFC middleweight titleholder Anderson Silva. In MMA Fighting's most recent welterweight rankings, St-Pierre is No. 1 at 170 pounds; Diaz is No. 4 on the list.

Diaz becomes the second high-profile Strikeforce fighter to migrate over to the UFC following Zuffa's purchase of its rival promotion in March. Jason "Mayhem" Miller signed with the UFC not long after, booking a fight against Aaron Simpson for UFC 132 in July. But White last week announced that Miller will coach against Michael Bisping on Season 14 of "The Ultimate Fighter," then face him on the TUF 14 live finale.

But while Miller's new deal appears to be UFC exclusive, Diaz's contract could open the door for other fighters to sign new Zuffa deals that would allow them to fight under both banners.

White's announcement of the Oct. 29, event, a certain pay-per-view, as UFC 137 sets up a busy stretch for the promotion, which has already announced a UFC Fan Expo and event in Houston on Oct. 8. And in April, MMA Fighting was first to report that the UFC was set to return to England for an Oct. 15 event. There are also plans in place for an event in Denver on Sept. 24, plus a return to New Orleans for a Spike special show on Sept. 17.