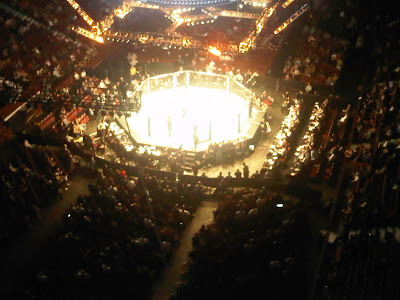 UFC 131 featured a heavyweight showdown in Junior Dos Santos vs. Shane Carwin at the Rogers Arena in Vancouver, British Columbia, Canada.
UFC president Dana White confirmed an attendance figure of 14,685 and a live gate of $2.8 million (U.S.).
UFC 115, which took place in June 2010, scored 17,669 attendees for a $4.22 million gate.


OFFICIAL UFC 131 BONUSES
FIGHT OF THE NIGHT: Dave Herman vs. John-Olav Einemo
KNOCKOUT OF THE NIGHT: Sam Stout
SUBMISSION OF THE NIGHT: Chris Weidman
All 4 of these fighters scored an extra $70,000, all on top of their salaries, enriching their UFC 131 fighter purses.


Following Saturday's UFC 131 event in Vancouver, British Columbia, Canada, UFC president Dana White took dead aim at a few judges' decisions he deemed unforgivable while suggesting those officials should not be used in MMA competition ever again.
However, White also laid high praise on one referee from Saturday's card, one the UFC boss said proved once again (well, twice actually) why he's the best in the business.
"One of the things I want to say – because you guys always hear me, and I did again tonight, smashing the judges – is the guy that was scoring 30-27, seriously?" White said. "Seriously, the guy who judges that should never be asked back to judge ever again.
"I don't know what the [expletive] in the world that guy was seeing. He should never judge a fight again, ever."
White was actually referring to more than one official. In the night's very first fight, judge Dave Hagen awarded Darren Elkins a unanimous decision over Michihiro Omigawa, 30-27.


Hagen duplicated the feat when he gave Kenny Florian a 30-27 win over Diego Nunes. Judges Jason Darrah and Chris Franco saw the first round for Nunes, and awarded Florian a 29-28 round.
"I actually had to go to the restroom (during the Florian-Nunes fight)," White admitted. "I left halfway through the third round. I came back later, and Joe Silva said, 'Can you believe that that was 30-27? I said, 'Someone scored that fight 30-27?"
Additionally, Nelson "Doc" Hamilton gave Mark Munoz a 30-27 victory over Demian Maia during a UFC 131 bout. Darrah and Sal D'Amato each felt Maia, who visibly rocked his opponent with much-improved striking, had at least done enough to take the opening round, and they awarded Munoz a 29-28 win.
"I had the first round going to Maia, second round going to Munoz, and the third round was tough to score," White told MMAjunkie.com(www.mmajunkie.com). "Third round was tough. If that went either way in the third round, I could have said, 'Yeah.' But 30-27? Come on."


White was especially frustrated by the odd scores considering the promotion provided each judges with cageside monitors, a new procedure recently approved for use by the Nevada State Athletic Commission designed to provide the officials with a closer view of the action.


It didn't work, and White admitted he's getting toward the end of his rope.
"Something has to be done about the judging," White said. "It has to. It's so bad, and not only does it affect people's lives, it ruins everything for people that are watching. You watch it, and you're like, 'What? What – 30-27? What are you watching?'
"And now we've got TV screens. What the [expletive]? You've got a TV screen. How did you judge that 30-27?"
According to White, the judging was so poor in the Elkins-Omigawa fight, the wrong fighter was awarded the win. Elkins now has the official victory, but White said he and the promotion are treating it like an Omigawa win.
"We're going to pay [Omigawa] his win money," White said. "I don't care what the judge says, he won the fight. … I say he won. Overruled."


Dean quite simply the "best in the business"


For all his criticism of the judges, White actually had strong praise for referee Herb Dean.
"I don't know this guy," White said. "We don't hang out. I've said, 'Hi,' to him, but I've never said two words. Herb Dean is the best referee in the business. I thought it before [tonight].
"When you've got a fighter there, sometimes these guys get scared, and they get nervous or whatever, and they don't want to get booed. You're in charge in there. You make the decisions."


White pointed to Dean's curious stoppage of the evening's main-event to check what appeared to be cuts that had been bleeding consistently since the opening frame. As White explained to a small group of reporters at the evening's post-event press conference, there was actually a small patch of skin dangling over Shane Carwin's eye that needed to be checked.


Additionally, White (and even main-event winner Junior Dos Santos) praised Dean for allowing Carwin to fight on in the opening round, even as Dos Santos was pounding away from the top with punches and asking if the referee was going to halt the bout.
"[Dos Santos] says, 'Stop the fight,'" White said. "No, I don't want to stop the fight. This guy can continue. Sure enough, he could."


White also pointed to a preliminary card bout between Nick Ring and James Head, where the action needed to be halted in the final round to check a few cuts on Head's, well, head.
After Head was cleared, Dean needed to restart the action on the floor. Both fighters jostled for an improved position on the restart, but White said Dean handled the issue like a true professional.
"In the Nick Ring fight, I don't know if you guys could hear it in press row, but when he stopped the fight and stood them up then put them back on the ground, both fighters were arguing with him over what the position was when they started," White said. "He said, 'No, what you had was,' and said exactly what they had. Half the referees, maybe all the referees in this business wouldn't even know what the [expletive] he was in – wouldn't even know what it was called or what it was."


In short, White feels judging is still lagging behind the rapid expansion of the sport. However, he believes Dean is setting an industry gold standard as the third man in the cage.
"If I'm a fighter, and I'm in there, and my record is on the line, my money is on the line, everything, I want to see Herb Dean standing in the octagon in between me and the next fighter," White said. "I believe [Dean] is the best in the business – maybe the best referee ever in this sport."

This past year's UFC 115 event became the quickest sellout in the promotion's history when all available tickets were snatched up within 30 minutes (though many were later dumped onto ticket resellers at an inflated price). It generated $4.2 million in sales. This year's event is a different story.

In other news while in Vancouver UFC President Dana White confirmed on Thursday the promotion has decided to make all main events five-round affairs, including pay-per-views and shows aired on Spike TV and Versus.
Up to this point, five-round contests have been reserved for title fights.
"From this day forward, as we speak right here, right now, every fight that is a main event that is not a title fight will be five rounds," White said.
The new policy will not have an effect on bouts that have been previously signed off on, such as a light heavyweight fight between Rashad Evans and Phil Davis, which will headline UFC 133 in Philadelphia in August.


White said he felt it was unfair to make the switch on fighters who had already started mentally preparing for a 15-minute fight as opposed to 25 minutes.
"It should be (five rounds)," said White, pertaining to the Evans-Davis fight. "But what I don't want to do to guys is, if we've already signed the bout agreement, you're mentally training for a three-round fight. For us to come back and say, it's a five-round fight, you can't do that to a guy."
According to White, the five rounds will remain in effect even in situations where a fighter pulls out and is replaced on short notice.


BCMMAA.COM was in attendance at UFC 131, we had a chance to enjoy the fights from one of the Roger's Arena Penthouse Boxes. Thank you to Tony Walters of Takedown Fight Media, Dino Minichello of Triumph Capital, Sammy Piccolo of Quest for Glory FC, Darwin douglas of WARpath MMA, TJ Wozencroft of  Honour Combat Championships, "Ragin" Kajan Johnson, Matt "The Law" Lindland and Darren Elkin, it was a great night of fights in good company.
Publié par Ben Mehdi