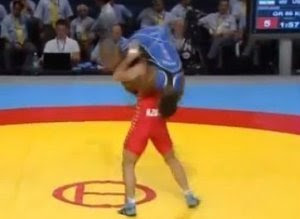 This is probably the most impressive takedown we've seen all year (maybe ever, but we've seen some crazy stuff).  It's certainly the talk of the MMA/grappling world today, so we're getting in on it.

Background: Ellis Coleman is a Team USA wrestler known for his creativity and his throwing capabilities.  He just took the bronze (66 KG) at the Junior World Championships in Bucharest, Romania, which is where this clip comes from.  He's a phenom in the making to say the least.

The innovator of this awesome move is Ellis Coleman, a freakish standout wrestler from Illinois. Formerly a resident of the U.S. Olympic Education Center at Northern Michigan University, Coleman now trains full time at the Olympic Training Center in Colorado Springs, Colorado. Coleman owns high finishes in elite tournaments at the junior and cadet levels. He also placed placed third at the 2010 US World Team Trials and with some fine tuning stands to be a potential candidate for the 2012 Olympic Team.

Ellis' trademark "flying squirrel" is best described as a "jumping reverse body lift". It's kind of like he jumps and slips behind his opponent, secures a reverse body grip and performs the lift from there, but it's all in one fluid motion. Apparently, he's hit this move several times before, but I'm guessing it's never made it to film. But to do it in the Junior World Championships just adds to the flare of it all.

The Video comes from Ellis' match against Iran's Mehdi Chooli Zeidvand at the Junior World Championships (Greco Roman). Ellis went on to place third in the 66 kg (145.5) weight class.