Menu
Home » »Unlabelled » Seminar with Fabricio Werdum in Vancouver BC

Seminar with Fabricio Werdum in Vancouver BC 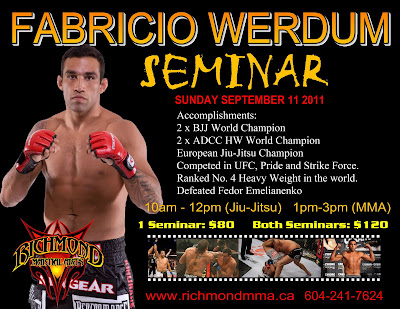 He holds black belts in Brazilian Jiu-Jitsu, Judo, and Muay Thai. Werdum has competed in Pride Fighting Championships, the Ultimate Fighting Championship, and made his Strikeforce debut on August 15, 2009. He is currently ranked No.4 heavyweight in the world by Sherdog. He is the first fighter to decisively defeat Fedor Emelianenko in mixed martial arts competition.

On September 11 he will be in Richmond, BC Canada (Vancouver) running 2 seminars.