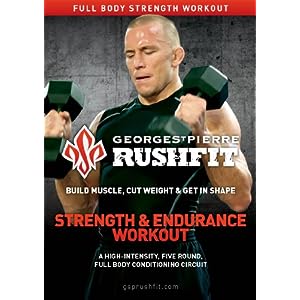 -- Revenues for the second quarter ending June 30 were $582,251, a 3.6%
increase over the previous quarter. The growth this quarter is despite
seasonal trends for health and fitness products when revenues in the
first quarter of the calendar year typically generate the largest
proportion of annual sales.

-- In connection with the initial launch of the GSP RUSHFIT Direct Response
TV Campaign in June, wholesale revenues increased 195% overall in the
2nd quarter, as retail distribution continued to grow in Canada.

-- On June 27, 2011 Mr. Jeffrey Sackman, former President of Lionsgate
Films and CEO and Founder of THINKfilm, was appointed to the board of
directors of the Company.

Revenue
The total revenue for the six months of $1,144,078 (July 31, 2010 - $5,053) continued to be driven primarily by the Company's new product GSP RUSHFIT, an 8-week home-based DVD workout program starring Mixed Martial Arts ("MMA") welterweight world champion Georges St-Pierre. In addition to the product sales directly through the GSP RUSHFIT website (www.gsprushfit.com), wholesale revenues grew by 195% through the Company's partnership with Northern Response (International) Ltd. ("Northern"). Product sold to Northern was distributed in Canada through some of the largest retailers such as Future Shop, Best Buy and Walmart Canada.

Plans for international expansion continue to move forward with expansion planned in the next quarter.

Mr. Jeffrey Sharpe, CEO and President of DSS stated, "We are very pleased with the financial results for our second quarter and for the 6 month period ending June 30, 2011. For us to increase our revenue in the second quarter over the first quarter is a very positive sign that GSP RUSHFIT is gaining significant traction in the retail market place.

Typically revenues for health and fitness products experience seasonal trends with the first quarter of the calendar year most often generating the largest proportion of annual sales. We have now sold over 25,000 copies of GSP RUSHFIT and have over 20,000 followers on our GSP RUSHFIT Facebook page. Our retail sell through has happened very quickly and Northern Response (International) Ltd. anticipates the program being for sale in over 3000 stores across Canada by the end of the third quarter. We look forward to expanding our distribution channels internationally and extending our marketing and advertising reach throughout the balance of 2011." GSP RUSHFIT was launched on December 10, 2010 and has quickly established itself as a premium brand in the lucrative home fitness market.

Expenses
During the six month period ending June 30, 2011, operating expenses increased to $1,477,584 (July 31, 2010 - $557,587). Contributing factors to this increase of $919,997 were those directly related to the increased revenue generated in this quarter by the sales of the GSP RUSHFIT program and expenses related to the publicly traded status of the Company for which there were no comparative expenses in 2010.