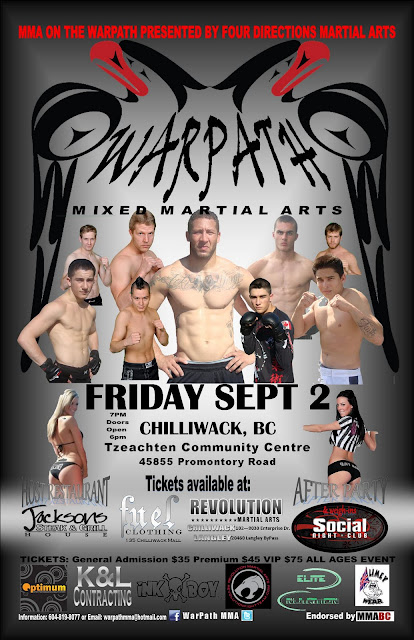 WarPath Mixed Martial Arts has an exciting line up of live fights scheduled on Friday September 2nd, 2011 at the Tzeachten Hall in Chilliwack; but the live fights are not so much for the fans as it is for the careers of many young athletes from the Fraser Valley who will be entering the ring that night.
The world of Mixed Martial Arts, the fastest growing sport in North America has captured the lives of many young athletes in the upper Fraser Valley. These athletes, who train intensively up to three times a day, are the future champions of Mixed Martial Arts. With WarPath MMA II scheduled this Friday and match ups already made for WarPath MMA III, these young athletes have the ring experience that is critical to the development of their MMA careers.


The organizers of WarPath MMA, Darwin and Francine Douglas and Harley and Rachael Chappell, and Sean O’Halleron are proud to have Brandon Wololski, Luis Torreno, and Taylor Shelly, from Chilliwack make their debut fight this weekend. Jamie Siraj (1-2), Tom McCormick (0-1) from Chilliwack will also be fighting.  Many of their opponents will be from Alberta, the Yukon Territory, Kamloops, Vancouver Island and the lower mainland. Cliff Schultz (0-0), originally from Agassiz, BC, and now lives in the Yukon Territory with his family and owns Avalanche MMA will be making his debut fight this Friday as well.
Tickets are available at Revolution Martial Arts. Address 8030 Enterprise Drive, Chilliwack BC or call 604-819-7040 or 604-819-8077.