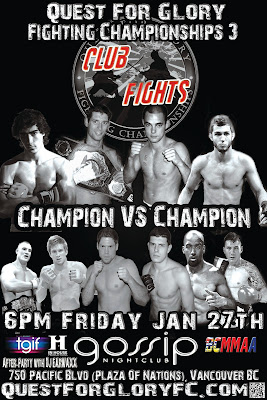 Due to injures and illnesses some competitors have had to drop out since the line up for the January 27th, 2012 QFGFC event was originally announced. Notably the reigning Quest for Glroy FC Welterweight Champ Chris Richard Anderson (shoulder injury during training) and Warpath MMA featherweight Champ Cam Deleurme. Suitable replacements have been found and below is the updated fight card for what is shaping up to be Vancouver's most exciting MMA event since UFC was in town!


Chris Anderson 2.0 from Island Warriors (Campbell River BC) will be taking another step up in competition when he faces current WCP Welterweight champ Saied "The Prince of Persia" Mirzaei (Reality MMA); Since his last win comes over current North American Challenge (NAC) Welterweight Champ Cass Young from Bad Boy's MMA in Surrey BC (Who was scheduled to be on the card but no sutable opponents stepped up). Anderson was training for a three round non-title fight but when the chance to fight for the West Coast Promotions belt came up he took it without hesitation. Both men (2.0 & P.O.P) are on a consecutive win streaks and both are known to have impressive stand-up striking abilities.


Christiaan Allaart from Infinity MMA in Langley BC is now set to go against the currently Undefeated WCP Featherweight champ Emilio "Get Money" Ditrocchio from Posener's Pankration. Christiaan Allaart might be relatively new to competing in the octagon but he holds a record of 10 wins and 3 losses in Kickboxing (which is very similar to Ditrocchio's Muay Thai record) as well a recent win over the original opponent (Cam Deleume) at a Brazilian Jiu-Jitsu competition. These two well-rounded featherweights mean business as the Quest For Glory Fighting Championships Title is on the line.


Shinji "Shinobi" Morito from Franco's Pankration (Vancouver BC) has stepped up on short notice to test Rico "Beast Mode" Brinson. Morito received a silver medal at the Muay Thai tournament in the 2011 Western Canadian Martial Arts Championships while Brinson has received the Gold medal in last year's Jiu-Jitsu tournament of the same organization. Franco's Pankration is know for producing well-rounded fighters but most would speculate that Shinobi will be looking to keep the fight standing  for a knock out finish, while Beast Mode's strategy should be to take the fight to the ground and apply a submission. This is classic match up of a striker versus a grappler is sure to produce a mesmerizing battle of wills.


MMA, hot girls, drinks and dancing all combined under one roof for one night!


Tickets starting at only $40!!
VIP Seating $99 (limited availability, seats on the stage and around the cage)
Doors open at 6 pm 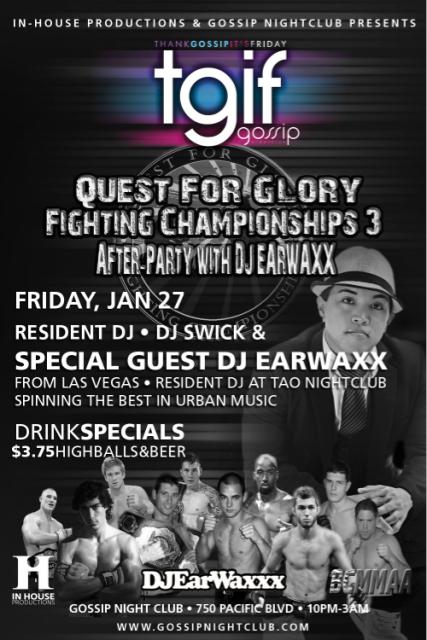