With the UFC app on XBOX 360, you can see all your favorite fighters in their most epic moments right from your living room. You get unprecedented access to the fights with live event videos and a huge selection of videos on demand, and of course, an easy way to order the fights on Pay-Per View. The best part, it’s all streaming your way in High Definition  And with the power of Kinect for Xbox 360, you control the action simply with your voice or a wave of your hand, so you never miss a moment.  To celebrate this weekend’s epic event – UFC 154: St-Pierre vs. Condit - Xbox 360 is offering 30% off Pay-Per-View purchases for a limited time. Go now to the Ultimate Fighting Championships app to order UFC 154 and become a real fan with UFC on XBOX 360. 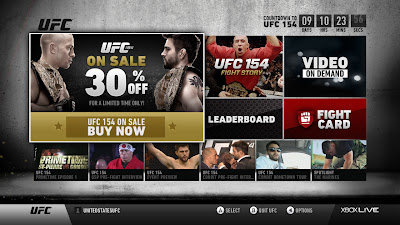 For more information on the UFC app on Xbox 360, visit: www.xbox.com/ufc