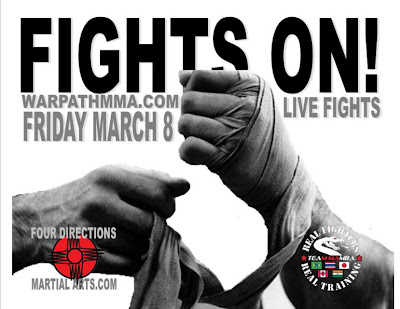 WarPath MMA IX is scheduled Friday, March 8th, 2013 at 8pm to be held at the beautiful Squiala Community Hall, at 45005 Squiala Road (near the Eagle Landing Centre) in Chilliwack, BC. WarPath MMA supports amatuer martial arts athletes by providing an opportunity to fight safely and fairly. With the growing number of partnerships and relationships being built in the Fraser Valley, WarPath MMA is proud to advance the sport of MMA and advance the lives and careers of so many young athletes.

Tickets are $35 and $75 each – available at Four Directions Martial Arts Academy at 8030 Enterprise Drive, off of Yale Road West, at the Sto:lo Gift Shop at 7225 Vedder Road, at Inkboy Tattoo Studio in Abbotsford, and a Mamba Martial Arts in Abbotsford. Ticket are also avilalbe online at www.warpathmma.com

Gagan Gill will be making his amateur debut with WarPath MMA. Gill is a 17 year old from Abbotsford graduating this year. He started training to keep himself busy after school and soon found a love for the sport. Gill will use his experience in the ring on March 8th to fight professionally. Jared McCaan is a chef at a local restaurant in Abbotsford, BC. McCaan first started training as a way to stay healthy and fit, but soon found a calling for competition in the ring. Suzy Watson, is 29 years old from Abbotsford. She is an online graphic developer and works with Abbotsford Tourism. She originally started training martial arts as a form of self defense, but now is motivated to compete to the highest level. Watson hopes to make her pro debut internationally this year. Gill, McCaan and Watson train under the well renowned Coach Kultar "The Black Mamba" Gill. Gill is a professional Muay Thai and MMA fighter, currently signed with Super Fight League in India, and is the owner of Mamba Martial Arts Academy in Abbotsford, BC. 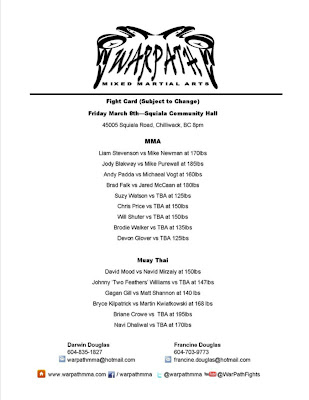