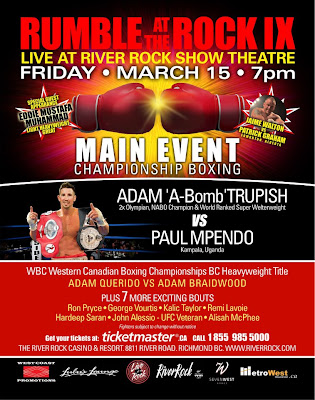 Once again, West Coast Promotions has teamed up with the River Rock Casino Resort to present yet another exhilarating evening of boxing at the River Rock Show Theatre.
Rising world-ranked super-welterweight contender Adam "A-Bomb" Trupish boxes in the main event!
The undefeated Canadian and North American Boxing Association Super-Welterweight Champion looks to contend for a world title within a year.
After 11 spectacular wins with 8 via KO, he looks to continue his winning ways here at the River Rock Casino Resort on Friday March 15th.
The most respected world championship belt is getting into the amateur boxing arena.
For the 1st time in history, there will be a World Boxing Council, World Amateur Boxing championship up for grabs this year.
It begins with the Western Canadian WBC qualifiers on the under-card of 4 quality professional bouts.
This card features up and coming local stars that will be fighting hard for their wins so that they themselves may contend for Canadian, and International, belts in the future.