“Unstoppable” Angela Lee has competed across the United States, and even traveled all the way to Europe to participate in the Pankration World Championships, and was still completely at ease.

However, the moment she arrived in Singapore for her professional mixed martial arts debut two years ago, the butterflies were flying wildly in her stomach. She could not keep her nerves under control. 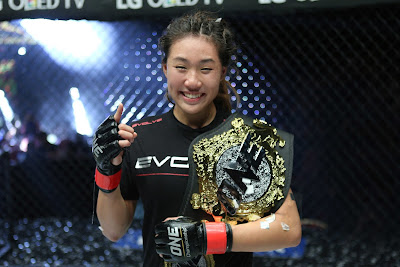 The reigning ONE Women’s Atomweight World Champion was scheduled to make her grand premiere on 22 May 2015, and it is obvious she has come a long way since then.

Today, she is the youngest mixed martial arts world champion in history with a perfect 7-0 record, fulfills media commitments around the world, and has become the face of women’s martial arts in Asia.

The day before her match against Aya Saber, however, she was far from the confident young woman we see today.

“I was just so nervous and so scared. You could see it all over my face, and it was just the weigh-ins,” the 20-year-old recalls. That was apparent to ONE Championship’s Vice President of Operations & Competition, who tried to calm her down. “Matt Hume just looked at me, smiled, and said, ‘Relax, you are going to do well.’ I was like, ‘Ok’, but I was terrified.”

Soon after, the initial shock wore off, and Lee’s mind started to relax. She met some of the other martial artists backstage and felt embraced by the friendly atmosphere. Also, she was confident in her skills, as her father, Ken, and her brother, Christian, had diligently trained her for eight weeks at the family’s United MMA gym in Waipahu, Hawaii.

In addition to training at the gym, Ken and Jewelz, her mother, had done their utmost to prepare their daughter mentally.

“My parents gave me long talks about how to deal with the match and being under pressure, and I feel I perform best under pressure. I have ever since I was a little kid,” the champion explains. “And I remember my dad saying, ‘You only get one chance to make a first impression.’ I was like, ‘Yeah, I have to do well.’”

With the support of her family behind her, Lee was determined on the night of the bout. She stepped inside the Singapore Indoor Stadium and made her big debut against Saber, an experienced Egyptian Top Team product with eight bouts under her belt already. 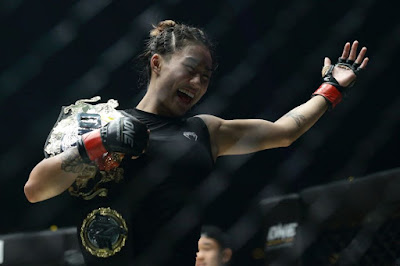 The “Unstoppable” one may have experienced some anxiety the day before, but the minute she stepped inside the arena, any butterflies that were left had vanished.

“The moment I heard my entrance song play, I felt good. I just felt that this is where I belong, so I came out beaming with a big smile on my face, and I was so happy to be there,” she says. “Honestly, one of the best things about martial arts and what I do is the walkouts — getting to see the crowd, how they react, and all the energy in the stadium. I was taking it all in.”

Once the bell rang to begin the contest, the two immediately exchanged punches and leg kicks, with Lee showing the crisper hands. Twenty seconds into the bout, the Singaporean threw a left cross and used it latch onto Saber’s head, and then flipped her to the canvas. She quickly, and methodically transitioned from half guard into the full mount.

Saber knew she was in trouble. The Egyptian rolled over to avoid the inevitable pound and ground strikes, but Lee held on to her back tightly and started to set up the rear-naked choke.

Again, Saber rolled over in an attempt to shake her off, but the “Unstoppable” and unrelenting atom weight fell into side control, placed her knee on her rival’s belly and rained down some punches. Finally, Lee grabbed Saber’s right arm and secured a tight armbar, forcing the tap at the 1:43 mark of the opening stanza.

“As soon as we touched gloves, I did not hesitate, and I did not have a second thought,” Lee says. “I just went in there and did what I trained to do. That is why the fight went so well. I was just extremely focused and wanted to win so badly. I felt like this was the beginning of the journey.”

It certainly was the beginning. The Singaporean won her next four matches by submission and then defeated Mei Yamaguchi for the inaugural ONE Women’s Atomweight World Championship, practically just one year following her big debut.

Fresh off a successful title defense over Jenny Huang at ONE: WARRIOR KINGDOM last March, Lee now finds herself with arguably her toughest test to date.

She will return to the Singapore Indoor Stadium to defend her coveted belt for the second time. It will be on Friday, 26 May, against Istela Nunes in the main event of ONE: DYNASTY OF HEROES.

Although the young heroine has become the face of ONE Championship and women’s martial arts in Asia, she reflects fondly on that fateful night two years ago, where she used Saber as a stepping stone on her path to greatness.

“Everything was how I imagined it to be,” she says. “This is what I am working towards, and this is the dream I always wanted, so I felt very happy and very grateful to be there. I felt like my parents got me to this level, this global level, so I needed to perform well not just for myself, but for my family.”
Publié par Ben Mehdi
Libellés : All