A+ A-
Print Email
Click here for the Results 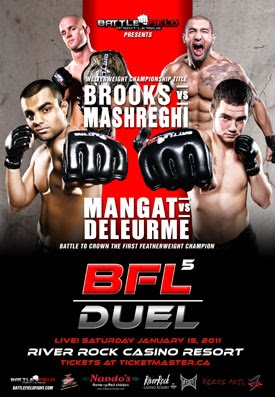 Battlefield 5 will be on Saturday January 15th, at the River Rock Casino Resort in Richmond B.C. For Tickets just click here
Battlefield Fight League made two speculated contests targeted for Battlefield 5 official Friday afternoon. Marco Caffiero will meet Jason Keller in a welterweight fight, and Leo Xavier will take on Chris Everitt in a middleweight bout on Jan. 15 at the River Rock Casino in Richmond, B.C., the promotion announced today.
Weeks ago, it was rumoured that Dwyer would fight Keller for a title shot at BFL 5. News eventually leaked, and the rumour was proven to be only half-true: while both men will appear on the January card, they will not compete against each other that night.
Caffiero (1-0) made his Battlefield debut at BFL 2 making short work of Sonny Sahota just 20 seconds into the first round. Keller (1-1) has been making considerable improvements on his game especially his striking in the past year under the tutelage of James Griffiths. , The pair’s BFL 5 fight promises to deliver a back and forth action packed fight.


“These guys are both very big Welterweights. They both walk around at over 190 pounds and are making a huge cut to make welterweight. Caffiero is so fast and explosive, is more than a handful for anyone, but for the first time Caffiero will face someone who can match him in strength and is not afraid to stand-up and trade blows with him.” Said Golshani
Xavier (1-0) will be making his much anticipated Battlefield debut in January. The well rounded Brazilian fighter joins Battlefield with his sights set on a future fight against Middleweight star Justin Lansing. Chris Everitt (3-0) is the current Extreme MMA Light-Heavyweight champion. He will be fighting as a Middleweight for the very first time in his career to make a run for the Battlefield Middleweight title.
“Everitt wants to fight the best guys out there to test himself, he is a current champion at extreme MMA, but the talent level of guys at Battlefield is much higher. Everitt gets a true test come January against a very well rounded guy in Xavier.” Said Golshani
Battlefield 5 will be the promotion’s first event of 2011, and it will be headlined by a Featherweight championship clash between Gary Mangat and Cam Delerume. Additionally, the Welterweight title will be on the line, as champion Jacen Brooks defends against Ash Mashreghi.