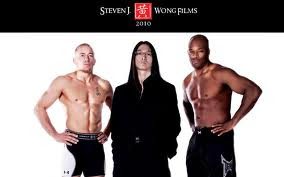 TORONTO — Steven J. Wong got more than he bargained for when he signed up to direct a mixed martial arts documentary.

The result of more than four years work and 300-plus hours of filming, "The Striking Truth" tells the different paths travelled by friends and fellow Montreal fighters Georges St-Pierre and David (The Crow) Loiseau.

The Canadian premiere, open to the public, is set for Friday night at Toronto's Sony Centre for the Performing Arts.

The film was Loiseau's idea.

"I had this vision a few years ago when Georges and I were not that popular," the 31-year-old Loiseau explains.

He believed their stories were worth telling -- that there was inspiration to go with their perspiration. And that their journey up the fighting ladder would become even more compelling.

"I submitted that idea to a few people but no one ever really paid attention until I met Steven Wong," he added.

Their story is as compelling as Loiseau envisioned, as "The Striking Truth" shows. But perhaps not the way he intended.

Wong, a former commercial and infomercial film-maker who is a third-degree black belt in taekwondo himself, wasn't sure originally where the project would take them.

"In this case, the juxtaposition between the two fighters was so incredible that even a Hollywood screenwriter can't script it that well. Sometimes you get a very dramatic, powerful ending. It's not necessarily the storybook ending that you want all the time."

When he started filming in 2006, Loiseau and St-Pierre were both UFC fighters on the rise.

Slightly older and with a longer record in the sport, Loiseau was seen as an MMA trailblazer from Quebec. A middleweight known for his entertaining flashy style, he was about to fight for the UFC title.

St-Pierre, a little younger and smaller at welterweight, was also on the rise.

Loiseau lost his title shot in March 2006 at UFC 58, beaten by champion Rich Franklin in a bruising five-round battle. The Crow has probably never been the same since.

In contrast, St-Pierre went on to win the 170-pound title at UFC 65 in November 2006. He lost the championship less than five months later but regained it at UFC 83 in April 2008 and has ruled his weight class since.

Today, the 29-year-old St-Pierre is seen as one of the best pound-for-pound fighters on the planet -- one of Canada's most famous faces worldwide, with big-name sponsorships to match.

The film ends for Loiseau at UFC 115 last June in Vancouver, where he makes another failed attempt to stick in MMA's big leagues. Wong shoots Loiseau's anguished self-analysis during a post-fight visit to an emergency room. 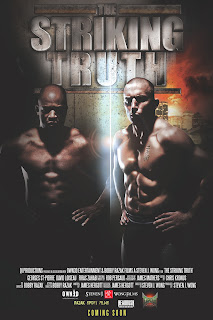 "I'm very close to these guys, these guys are like brothers, and even to be in the hospital room was very difficult, but then to have to make him talk about it ... and then on top of that my camera's 18 inches from his face, it's not a good feeling."

The film shows that St-Pierre (21-2) can harness his nerves to make him sharper in the cage.

"He's not the world champion because he can punch harder and kick faster than anyone else," Wong says. "It's not that he can jump higher. It's got nothing to do with his physical attributes. It's purely what is in his head."

For Loiseau (20-10), the demons hold him back and prevent the real fighter from emerging.

He has seen the same sports psychologists that St-Pierre has. And has tried everything from hypnosis to yoga.

After filming on the movie wrapped, and much soul-searching, Loiseau eventually elected to keep fighting and won a lesser title in California last Friday.

Wong admits to originally thinking he could finish the movie in two years.

"I had a ballpark (timeline) and it was probably about half of how much I devoted," said the 40-year-old from Oakville, Ont.

But it needed closure.

"Two years ago, a year and half ago, there is no end," he said. "Sure Georges is still being Georges, beating everyone and David was still trying to get back in the UFC. There was no end."

Then came Vancouver, where Loiseau was left bloodied and battered.

Win or lose, Loiseau remains fiercely proud of the story.

"This movie is not only for MMA people or the casual MMA fan, it's for everybody, it's not about fighting, it's a human story," he said.

Wong believes both men showed courage in opening themselves up to the camera.

"David Loiseau and Georges St-Pierre will always be champions in my eyes regardless of whether they have a belt or not, because you look at the amount of courage it would take to do something like that, to spill your guts, to really open up and tell the world."

And he believes Loiseau's battle with his emotions will touch a cord.

"There's a lot of people out there that face that type of anxiety that think they're alone, sometimes you have these feelings, you feel you have no one to talk to, it's just you and you don't know how to deal with them."

Being able to tell the human side of the fighters is what attracted Wong, whose relationship with both men enabled him to draw out new sides to their story.

St-Pierre and his camp reveal the extent to which the newly crowned champion was in disarray prior to his first failed title defence against Matt Serra.

St-Pierre, who is usually in tight control of his emotions, lifts the mask when he talks of using his winnings to pay off his parents' mortgage and other debts -- a story he has told publicly before but not quite as personally.

And he tells the viewer about his most prized possession, the one he would take over his championship belt in case of fire.

Both men are seen struggling in their profession -- a drained Loiseau returning to the sauna again and again to make weight while St-Pierre is shown swaddled from head to toe in towels to soak up liquid from his body.

But Wong adds to the cinema verite with some eye-popping scenes of the fighters training, using every trick in a film-maker's arsenal to show them. The scenes, whether they are shot in slow motion or a camera circling a ring, are poetry in motion.

The fact the movie works without actual fight tape from the UFC -- there is some backstage footage -- is a victory in itself.

"There was a four-year break from a lot of stuff," he said of his life during the project.

Wong hopes to show the movie via limited theatrical release in Canada, and to give it wider exposure worldwide.

"My objective is to have as many people see it as possible ... I think this movie can really benefit everyone, with the inspirational factor, with the emotional factor. I think everyone can learn from these two."

As the finished product comes to Canada -- there was a premiere in Las Vegas in December -- Wong finds himself at odds with some members of his team, however.

Producer James Hergott and Bobby Razak, who did action sequences, have retained legal counsel who declined comment when contacted.

"I don't know if you want to call it a falling out," said Wong. "Their job is done."