Menu
Home » »Unlabelled » MMA’s ‘Saint Lion’: Out from the shadows and into the cage

MMA’s ‘Saint Lion’: Out from the shadows and into the cage 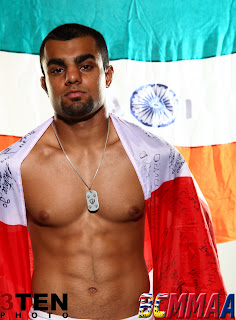 VANCOUVER BC — When MMA fighter Gurdarshan Gary “Saint Lion” Mangat goes into the cage for battle, he goes down to one knee and prays to God just as his Sikh ancestors used to do before going off to war.

He draws energy from them as he stares down his opponent and his lithe, lean body springs like a lion into action, flying on instinct.

When Mangat, who is 24, headed down to the Lower Mainland from his hometown of Williams Lake about four years ago, he had no intention of plunging into the sweat-soaked, sometimes blood-spattered, often intensely cerebral world of mixed martial arts fighting.

He was bent on the supremely serene career path of a chartered accountant. The sport followed like a non sequitur out of the blue.

About three years ago, he had been at a bar with a friend watching a UFC match featuring Rich Franklin, a former school teacher and a poster boy for the controversial sport.

He went home, found a gym and prepared to train.

“I had no idea what I was getting myself into,” said the athlete whose eyes burn so brightly, they could light up a dull wintry Vancouver day. “I kind of went to the temple that day. I prayed to be put on a journey that would work. I wanted something to live by. I wanted to be able to influence people.”

On Jan. 15, it became clear his prayer had been answered. At a splashy show at the River Rock casino, he laid claim to being the first Sikh 145-pound featherweight MMA champion in the sport’s history.

But it was far from clear at the start that the journey would work.

The first day in training, he got beat up so badly, he never wanted to go back. But that night, he thought about how he always has had a tendency to give up when the going gets rough.

Fortunately, Mangat proved a quick study. “I’m a very good visual learner. When I see something, I can pick it up fast.”

Getting into MMA fighting was certainly out of the norm and out of character for the kid from Williams Lake.

In high school, he just sort of accepted his role. He just wanted to fit in.

“I was kind of the short chubby kid and I was an easy target to pick on.”

When Mangat stepped out from the shadows and into the cage, he shed the mantle of the shy follower. He was staring at a whole new reality.

“When you step in, it’s the most pure feeling you will ever have because it’s so honest. You know that guy in front of you is there to take you out. He is there to beat you. Even though it is scary, it is a very honest feeling.”

Very early on, while attending a Sikh youth camp in Kelowna, he acquired the moniker of Saint Lion from Sikh weapons martial artists from the U.K. who discovered in Mangat this nice, somewhat tentative guy.

Then they had this fun competition where Mangat surprised everybody by taking out all his competitors.

Is there any way to describe the feeling?

Mangat tries. “Every inch of that belt symbolized every single thing I put into it and when nobody else really believed I could do it.”

His dad, who has worked so hard in the mill in Williams Lake to support his family, who moved there with nothing in his pocket, who built himself from the ground up, who had always provided for his family, came running into the cage after the win.

Mangat’s dream had always been to take the belt off and put it on his father’s shoulders. That is exactly what he did. He can still see the pride in his father’s eyes.

His father had always been the athlete in the family; his son had been the studious one. Now they had something to share.

Mangat doesn’t wear a turban and says he sometimes gets hate mail from extremists who resent him for waving the flag of India.

But he draws lessons and inspiration from his religious background. Because the Sikh religion is a warrior religion, he is surprised there aren’t more like him in MMA.

“A true warrior is someone who lives with humility, who spreads positivity, who lives a clean lifestyle. That’s what the Sikh religion has taught me. It has also taught me to think freely. That way, you learn so much about life.”

Now he is heading back to Williams Lake as an MMA champion instead of as an accountant. Five years ago, he would have scoffed at the possibility of this ever happening. He is going back to talk to school kids, to tell them that, yes, dreams really do come true.

Now, Mangat, who is 7-2, also dreams of heading down to the Las Vegas area and to one of the UFC camps with the ultimate goal of becoming the first Sikh to fight in the UFC. Of fighting one day in Rogers Arena in front of B.C. fans. Of becoming the poster boy representing MMA India, just as Georges St-Pierre and Anderson Silva are big names in the sport.

He feels the pressure that comes with the title and with being a first. “I’m a prospect now; before I was just kind of a fighter.”

He knows that to withstand it, he will have to remember where he came from, the people who have stayed with him right from the start and who he really is, the fighter they call Saint Lion.