Rumble At The Rock 8 – Results 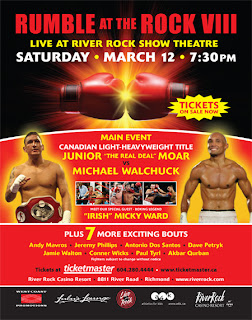 Rumble At The Rock 8 – Results
March 12, 2011
River Rock Casino Resort
The show got off to quick start at Steve Franjic finished by KO at 1min 24 sec of the first round.  Dowsett and Tyrl immediately changed pace as they took the match all 4 rounds for a Judges Decision that named Mike Dowsett the champion of a grinding battle between the two boxers.
For the third fight of the night it was Antonio Dos Santos vs. Dave Petryck. This fight did make it all 4 rounds granting Petryck a unanimous decision. Dos Santos’s coach, Bob McAdams of Sugar Ray’s responded to this fight by saying that. “He(Antonio) took a hard hit early on and never quite recovered. We will look at the film.”
Then it was Ryan Stewart vs, Jeremy Phillips. This was a hard fought match with an exciting finish. Stewart won in the last 10 sec of the last round with a TKO.
This lead into another grueling match, this time between Jamie Walton and Clayton Gladu. Jamie had mostly dominated rounds 1-3 until he tore his right bicep in the third round. He stayed focused and his years of experience kicked in as he kept to the basics and didn’t falter. The fourth round was fairly quiet as Jamie could only put up half a defense and throw his left jab. He powered though the round to be named the unanimous winner by all judges. Jamie’s word after this fight were this; “We fought a war and one gun survived.”
The Semi-Main event was another exciting finish as Andy Mavros def. Kareem Martin Jr. This fight went 5 rounds as both fighters battled back and forth, Andy dominated most of the rounds and was clearly delivering more combinations and more pain. Andy has come back from defeating cancer and sends this message to those battling in the cage and outside of it. “Never give up.”
The Main Event of the evening lasted all 10 rounds for a very exciting and possibly controversial fight of the evening. Junion Moar def. Michael Walchuck in a unanimous decision. The first 5 rounds seemed to be dominated by Walchuck who delivered fast combinations and hard hits. Junior held his own and stepped up his offensive game in the 6th round. He is a heavy hitter and caught Michael with a few large hits it the second half of the fight and the last 2 rounds went fairly evenly for both fighters. When Moar was announced there was a split crowd reaction, but that was immediately taken over by the enthusiasm of Moar’s team and supporters.
Rumble at the Rock was a night of entertaining and gave a true show to the fans.