Spencer faces Capdeville in BFL8 (MAY 28 NANAIMO, BC) Co-Mainevent 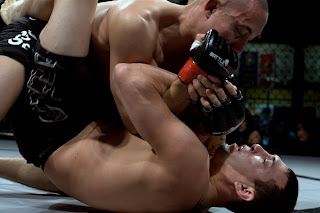 Trained at Nanaimo’s Impact MMA, Graham Spencer (27) will appear in his
second consecutive co-main event for the organization. Of course, his first
BFL fight at Battlefield Fight League 7 ended in surprising fashion when he
and his opponent fell from cage early round two, leading to a no-contest.
That outcome was particularly unfortunate for Spencer who was in clear
control throughout the bout. Of course, with six wins in his previous seven
career fights, that position was quite familiar for this supremely talented
featherweight.

Two middleweights, who scored quick finishes at Battlefield Fight League 7, and have earned the majority of their career wins via first-round KO, have been officially matched-up.
Better still, MMA fans get to see this fantastic fight live in Nanaimo, B.C. when Matt “The Riot Maker” Baker (5-2) faces Ryan Ballingal (4-5) at BFL8 on May 28th.

Born in small-town Courtenay, Ballingal (27) currently trains out of Nanaimo’s Impact MMA. His professional career has been filled with highs and lows, but his five career losses came to a talented group of competitors possessing a collective 18-4 record. At BFL7, Ballingal, who had scored each of his three previous wins via strikes, showed a new facet to his game by locking up an anaconda choke just fifty-nine seconds in. Adding some flash, Ballingal set up the finish by forcibly tossing his opponent clear over his head! Fighting in Nanaimo should once again make Ballingal a clear fan-favourite, but he must eventually back-up all of his obvious potential with a win over a high-quality opponent if he hopes to truly take his career to the next level.

He gets that chance against Vancouver’s own fearsome striker in Baker (26) of Revolution Fight Team, who scored an impressive KO via elbows at “Invasion.” In his own highlight-reel moment, Baker set that victory up with a powerful slam takedown. He is currently riding a three fight winning streak, but things weren’t always so easy for “The Riot Maker” who spent much of 2010 sidelined with a very serious infection in his thigh.

Here’s the real kicker: It was caused by an opponent’s tooth that embedded itself deep in Baker’s leg during a devastating knee strike and was then mistakenly stitched into “The Riot Maker’s” flesh. With four first round finishes and three (T)KO’s in his five career wins, Baker is never the type to approach an opponent with caution. He’ll come right after Ballingal from the opening bell, testing his chin both early and often; looking to continue building his reputation as B.C.’s knock-out king.

Both fighters have suffered all their career loses by submission, which makes exploiting this weakness a realistic approach should either fighter choose that strategy. A much likelier outcome, however, is that the lanky Ballingal looks to establish range with his superior reach before throwing some serious heat, while the more compact Baker attempts to close distance for either a takedown or to land some punishing strikes from inside.

If their histories have shown anything, odds are that Ballingal vs. Baker at BFL8 won’t last long, but it should be a heck of a ride!