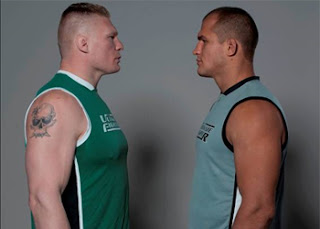 UFC heavyweight contender Junior dos Santos missed out on a promised title shot when champ Cain Velasquez underwent surgery to repair a torn rotator cuff after UFC 121. Dos Santos' consolation prize is a season coaching The Ultimate Fighter opposite Brock Lesnar. The two will then pair off at UFC 131 in a fight to determine who will be the first to challenge the returning Velasquez.Dos Santos spoke to Sherdog.com:

UFC President Dana White confirmed the bout according to UFC.com.

Herman enters the Octagon for the first time with only one real blemish on his record, a Jan. 2009 TKO loss to Mu Bae Choi in Sengoku. It was that loss, in fact, which Herman cites as the reason he began to seek out a gym and really start training.

As the story goes, Herman had done most of his training in his “living room” up until that point.

Now part of Team Quest in Temecula, Calif., Herman has aligned himself with training partners such as MMA veteran Dan Henderson and Rameau Thierry Sokoudjou (the only other fighter who holds a win over Herman, albeit a DQ).

Having lost his last two fights, Beltran has his back against the proverbial ropes. Beltran entered the UFC in 2010 and won his first two fights, a TKO over Rolles Gracie at UFC 109 and then a unanimous decision over Tim Hague at UFC 113.

However, consecutive unanimous decision losses to Pat Barry and Matt Mitrione have him in a do or die situation.