A+ A-
Print Email
Praetorian is a MMA brand from Brazil that was heavily advertisied during UFC 134. We looked for more info about Praetorian MMA but all we could find at the time is the article below where Praetorian MMA is said to have had a hand in keeping Sonnen out of brazil for UFC 134! 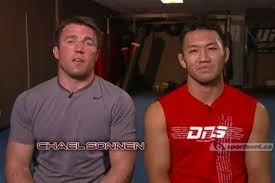 Chael Sonnen wanted to be in Yushin Okami's corner for UFC 134, and he still has a plane ticket to Rio de Janeiro.

It's Brazil that doesn't want him there.

Sonnen said a major sponsor of Okami's requested he not attend the pay-per-view event, which takes place Saturday at Rio's HSBC Arena.

A source with knowledge of the situation told MMAjunkie that Praetorian, a Brazil-based MMA brand, threatened to pull the Japanese fighter's sponsorship if Sonnen attended.

"There's a line of people that want to kick his ass," the source said.

And that could be the least of problems for the expert trash-talker. Sonnen said friends in the country forwarded him a local-media report in which a police chief threatened to arrest him on sight if he showed. The official cited a law that makes disparaging the national identity a crime.

"You don't have freedom of speech in Brazil; put it like that," Sonnen told MMAjunkie after a workout at Team Quest Tualatin.

The source said Sonnen's claim is untrue. But the fighter's bombastic interviews have created quite a stir.

In several highly circulated clips and on Twitter, Sonnen has maligned the South American country and several of its most popular fighters. Former light-heavyweight champion Lyoto Machida has been a favorite target, as have national icons and brothers Antonio Rodrigo and Antonio Rogerio Nogueira.

Brazil-based MMA manager Alex Davis said Sonnen's words have united Brazil's MMA community.
"Brazilians don't get together on other things, but they've gotten together on this," he said. "Brazilian authorities would not arrest Sonnen for anything he said. They would defend him. But he is talking about people that a whole generation of fighters worship."

Okami, of course, is facing another object of worship, that of reigning middleweight champ Anderson Silva, in UFC 134's headliner. Silva has not been on Sonnen's Christmas card list for some time.

While the onetime middleweight contender expressed regret over not being able to help his teammate, Sonnen is there to do what's best for his frequent training partner, which, in this case, is to stay away.

"I only want to be there to help him," Sonnen said. "I don't need to see the show. I can watch the show on TV. I was going exclusively in support of Yushin, and frankly, it's been headed this way for a long time. It's been headed the direction of, 'Hey, this is becoming a distraction.'

"This fight isn't about me. I'm not involved. I'm here to lend you support. But I don't want things thrown at what will unintentionally be him while he's in the ring or we're going to the ring.

"This is serious business. This is a once-in-a-lifetime opportunity, and it's not my place to disturb it or shift any type of attention to me. This is his moment, his night, his time to be the world champ."
by Steven Marrocco

Praetor (Classical Latin: [ˈprajtoːr]) was a title granted by the government of Ancient Rome to men acting in one of two official capacities: the commander of an army, usually in the field, or the named commander before mustering the army; and an elected magistratus (magistrate) assigned varied duties (per the historical period). The functions of the magistracy, the praetura (praetorship), are described by the adjective:[1] the praetoria potestas (praetorian power), the praetorium imperium (praetorian authority), and the praetorium ius (praetorian law), the legal precedents established by the praetores (praetors). Praetorium, as a substantive, denoted the location from which the praetor exercised his authority, either the headquarters of his castra, the courthouse (tribunal) of his judiciary, or the city hall of his provincial governorship