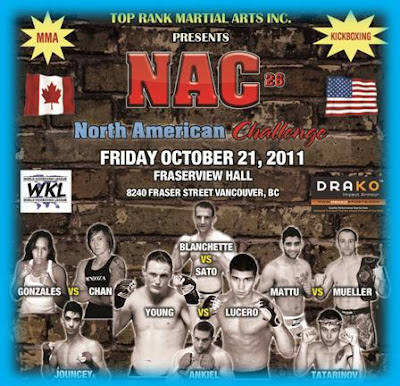 Click here for the results of NORTH AMERICAN Challenge # 26

North American Challenge is BACK in Vancouver following the smashing success of the 25 previous instalments. This show has reliably sold out well before the doors even open, so get your tickets soon! NAC 26 will feature an action-packed evening of exiting fights in a venue that offers incredible views from every seat in the house!

-MAIN EVENT .... Adam Blanchette out of Iron City Muay Thai  Richmond, BC Battling  5 round full Muay Thai VS Martello Jones out of   OTTAWA ACADEMY of MARTIAL ARTS  Ottawa, ON

- Cheryl Chan out of  Mendoza Fight Team Surrey, BC for Female Just won her second title in the state going for her 3rd title VS Jamie Gonzales Charlies Combat Club  Everett, WA for the Female NAC Flyweight Title

- Leigh Mueller Muay Thai BC welterweight Champ out of Candas best karate Victoria, BC faces. Tom Mattu  out of  WKX in Surrey, BC  for the Western Canadian Welterweight Title

- Super Bout 2...The Russian Punisher Stas Tatarinov Muay Thai BC Light Middleweight Champ out of WACHALS Martial Arts Surrey, BC
****   Plus more exiting bouts  **** ( Fight Subject To Change )
As always, this will be an amazing card that is stacked with edge-of-your-seat exciting fights!
Book early your tickets as limited tickets are available.
As Liquor will be served, we recommend you PLAN A SAFE RIDE HOME.