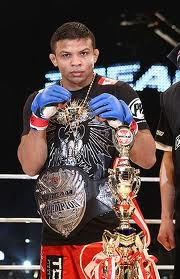 Congratulation's to BC's Bibiano Fernandes who won two fights to take the Dream bantamweight title, first defeating Rodolfo Marques by unanimous decision in the semifinal bout, then beating up Antonio Banuelos by first-round TKO in the final. Fernandes looked great, and he may just be the best bantamweight outside the UFC.

Fedor's performance in the main event at the Dream New Year's Eve show at the Saitama Super Arena in Japan was impressive, but it also showed just how mediocre a fighter Ishii is: His striking and stand-up defense are extremely rudimentary, and he just wasn't ready for an opponent of Fedor's level.
By Michael David Smith