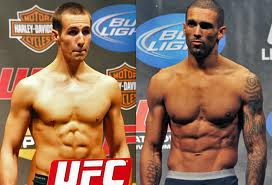 TORONTO - The UFC has confirmed that Canadian Rory (Ares) MacDonald will face English welterweight (Beautiful) Che Mills on March 24 at UFC 145 in Montreal.
The 22-year-old from Kelowna, B.C., who now trains in Montreal, was slated to face Brian (Bad Boy) Ebersole at UFC 140 in Toronto on Dec. 10 but was forced to pull out through injury.
MacDonald (12-1) is 3-1 in the UFC going into the Bell Centre card.
Mills (14-4 with one no contest) looked good in his UFC debut in November when he stopped Chris (C-Murder) Cope in 40 seconds at UFC 138 in Birmingham, England.
---
Overeem Gets Green Light — Heavyweight Alistair Overeem has passed his drug test ahead of his UFC 141 main event showdown with former champion Brock Lesnar.
Like Lesnar, the Dutch fighter was slated to take a pre-fight test. But things got complicated when Overeem left the U.S. during his training camp to visit his ailing mother in the Netherlands.
He eventually flew to England to provide a sample.
"The urine sample submitted by Mr. Overeem in the U.K. on 12/14 came back negative for all prohibited substances," the Nevada State Athletic Commission said in a release Tuesday.
The two big men meet Dec. 30 in Las Vegas.
---
Strikeforce Payday — Strikeforce lightweight champion Gilbert Melendez made US$150,000 for his successful title defence Saturday against Jorge Masvidal in San Diego.
Masvidal collected $23,000, according to the California State Athletic Commission.
Former light-heavyweight Gegard Mousasi also made $150,00 for his decision win over Ovince St. Preux ($17,000).
Women's 145-pound champion Cris (Cyborg) Santos made $66,000, including a $33,000 win bonus, for her 16-second stoppage of Japan's Hiroko Yamanaka ($8,000).
The commission purses may not tell the whole story, since MMA promoters do not always details all bonuses or contract details.
The show at the Valley View Casino Center drew a crowd of 2,995 and gate of $154,075.
By: The Canadian Press
Publié par Ben Mehdi