Menu
Home » »Unlabelled » BC liquor board approves Vancouver's first MMA event to be held in a night club!

BC liquor board approves Vancouver's first MMA event to be held in a night club! 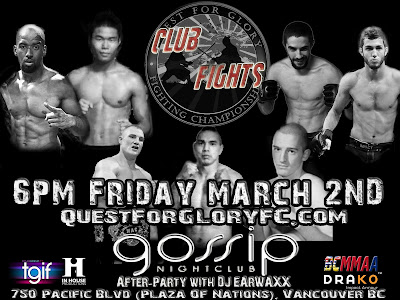 
The Quest For Glory Fighting Championships (QFGFC) series continues to break down the traditional walls of venue limitations for Mixed Martial Arts (MMA) events. By being the first to bring Mixed Martial Arts to Granville street in the summer of 2011 and now in six short months they have broken yet another barrier and combined the excitement of the Vancouver night life scene with the thrilling action of combat sports.

Quest For Glory Fighting Championships is a local Mixed Martial Arts promotion series that had its first two events in 2011. The third installment was scheduled for January 27th 2012 at the Gossip Nightclub but a week before the event the venue and the promoters were surprised by a phone call from the provincial liquor board (which directly regulates liquor primary establishment such as night clubs) informing them that a request for a temporary change to the liquor license was necessary.

The show had to be postponed which caused QFGFC a lot of complications but as of Friday February 24th the application has been approved and QFGFC 3 dubbed CLUB FIGHTS is now well underway for March 2nd, 2012!

This is great news for sports fans in Vancouver and province wide as it opens the door for MMA in a entirely new type of venue.

This will also be the first time QFGFC matches will be set in a 22 feet wide octagon cage.

A few tickets are still available. For this first show the attendance will be capped at about 65% of the venue's capacity but QFGFC is confident that after the March 2nd show the authority's will allow an increase to that number of guests attending future QFGFC events art Gossip Nightclub .

Eight fights are confirmed so far for this Friday with a main event title match between Emilio "Get Money" Ditrocchio for Posner's Pankreation in Vancouver and Christiaan allaart from Infinity MMA in Langley BC.

The other bouts scheduled are: