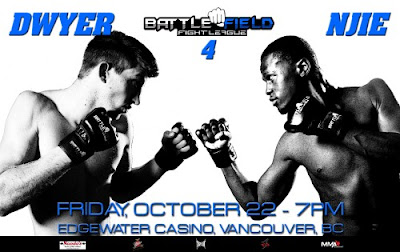 More videos coming soon!
BattleField Fight League 4 was a evening of excitement and some surprise finishes. The first fight of the night was Joe Boldo vs. Alex Bains. It came down to a Judges decision for Boldo after three rounds of close competition. Strong BJJ and wrestling made this match an on-going display of talent and heart.

Adam Miskiewicz vs. Zach Koch was a fight of a very different style. Miskiewicz charged right out of the gate and the first round consisted of Zach working to contain Adam's wild fighting style. It was all over in the second round when Koch found his opening and finished Adam in a rear naked choke at 2 min and 25 sec.

Eli Wyse showed his BJJ talents against Josh Lewis as he submitted his with a neck and leg triangle at the 1 min and 40 sec mark of the first round. Eli was fast and focused and it payed off right away.

Unfortunately Sanjeev Sharma vs. Rami Kadi was called a No-Contest as Rami received a cup shot that he was not able to recover from in time to finish the fight. For what we did get to see of the match it certainly looked as though we had just missed out on a good fight, looking forward to a match up in the future.

Emilio Ditrocchio vs. Alfred Leslie seemed like a miss-match. Again Alfred displayed that he is all guts but Emilio dominated the fight with submission after submission and quickly finished Alfred in the first round by Arm Bar.

Jason Noble vs Jeremy Kennedy was a fast fight right out the gate and appeared like it was going to be a great battle between these two talented fighters. However, Kennedy stepped up and quickly changed all that with a triangle at the 49th sec of the first round.

For the seventh fight of the night the crowd received the entertainment they had come out for. Well matched and each contender fighting like there was a title on the line, there wasn't, this proved to be a great fight. Transitions from stand-up to ground were fast and skilled, the judges decision went to Jefferson Alvarez who in the end was more dominant on the ground than Clay Gray.

Oren Hanscomb was the obvious winner of fight 8, he strongly dominated round one with BJJ and wrestling, in round two he almost sealed the deal with a guillotine. A judges unanimous decision named Oren Hanscomb the winner over Ryan Ince. Ince showed up to fight and put in a good effort, he just appeared to be out-manned in this match.

A surprise of the night came when Micah Brakefield defeated the heavily favored Andre De Silva with a rear naked choke in 1 min and 45 sec after taking a heavy slam to the ground while attempting to take down De Silva. A great debut for a fresh fighter.

Stuart Deleurme vs Ben Cote was a fairly even fight for the first round but had a swift finish in the second round when Deleurme TKO'd Cote in a ground and pound. Strong technique shown by Deleurme.

The main event of the evening, Matt Dwyer vs Yusuf Njie could not of been predicted. Both came in as strong contenders but Dwyer came out strong right away and was clearly the top grappler during the first two rounds and finished the fight with a strong TKO. Keep an eye out for this guy in the future, he is only getting better.