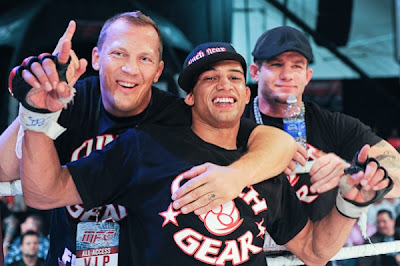 
Mr. Mahood brings to Takedown Entertainment his vast mixed martial arts experience as a fighter, promoter, matchmaker, judge, trainer and manager, as well as his international reputation for integrity and professionalism in the sport. Mr. Mahood’s love of mixed martial arts started at the age of 5 by learning boxing from his father and he has since attained a black belt in Tae Kwon Do, a third-degree black belt in Hapkido and has trained extensively in Brazilian Jiu-Jitsu and Kickboxing. He has competed professionally in MMA as Bill “The Butcher” Mahood for over a decade in the United States, Canada, Australia and Russia in events for the UFC, IFC, King of the Cage, Bodog and Strikeforce.
Mr. Mahood has also promoted 13 MMA fight cards and has been a matchmaker for countless others. He was the lead organizer and trainer for the Revolution Fight Team at Revolution Martial Arts in Langley, BC, and is working with notable fighters Bibiano Fernandes (5X World Jiu-Jitsu Champion and former Dream Featherweight Champion) and Denis Kang (Pride and UFC veteran) as well as upcoming fighters such as “Ragin” Kajan Johnson, Tyler “TNT” Jackson and Matt “Riot Maker” Baker. Managing fighters has taken him to competitions around the world in Korea, Japan, England, Ireland, France, Costa Rica and Ecuador. He is a certified MMA judge from the Certification of Officials for Mixed Martial Arts National Development (COMMAND) under the leadership of renowned MMA referee John McCarthy, and has judged in many MMA events including UFC 115 in Vancouver, BC. He also made presentations regarding the sport of MMA to the Vancouver City Council which furthered the sanctioning and staging of the first UFC event in Vancouver.
Currently, Mr. Mahood is the Chairman of the Mixed Martial Arts Association of BC (MMABC), a non-profit organization dedicated to help foster the growth of the sport of amateur mixed martial arts and to oversee the health, safety and welfare of the athletes who participate in it. As chairman, Mr. Mahood works closely with MMA commissions and responsible promoters from around the province to set and enforce standards of professionalism and safety in the sport.
“I am thrilled to be working with Takedown Entertainment,” said Mr.Mahood. “I love this sport and I’m at a stage in my career where I can take all of my experience in MMA and all those relationships I have worldwide, and bring them into Takedown.”
“Mr. Mahood is an experienced and committed individual who is ideally positioned to actively develop the sales and marketing of the company’s products and brands to the emerging MMA marketplace,” added Peter Wudy, President of Takedown Entertainment. “His knowledge of the industry and its needs will help expedite Takedown’s corporate global growth objectives.”
Mr. Mahood’s role in Takedown Entertainment is to work closely with the business development team and advise with the Sales & Sponsorship and Televised Entertainment divisions.
About Takedown Entertainment Inc.
Takedown Entertainment, a Nevada corporation with offices in Beverly Hills, California, is an integrated media and sports entertainment company that acquires and distributes mixed martial arts (MMA) content, programming and products to North American and International markets.
Safe Harbor Statement under the United States Private Securities Litigation Act of 1995: this release may contain forward-looking statements that are affected by known and unknown risk, uncertainties and other factors which may cause the actual results, performance or achievements of the Company, or industry results, to be materially different from any future results, performance or achievements expressed, implied or anticipated by such forward-looking statement. The Company does not intend to update this information and disclaims any legal liability to the contrary.
Publié par Ben Mehdi