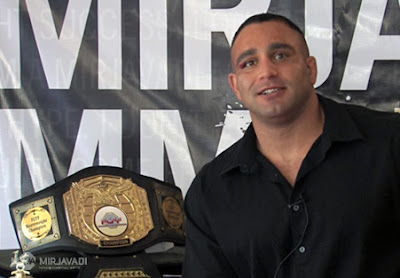 (Youth1) – Recently, MMA fighter and instructor Shaun Mirjavadi started a 10-week program in Traverse City, Michigan where he trains troubled teens who are on juvenile probation. Mirhavadi believes the training will benefit them by keeping them off of the streets and increasing their self-esteem. Find out more in the Q and A with Mirhavadi below.

Mixed martial arts fighter and instructor Shaun Mirjavadi works with troubled teens at his gym in Traverse City. He likes hammering a bit of sense into them -- during training sessions, of course. A father of two and Central Michigan alum, Mirjavadi, 30, enjoys getting involved in the community and helping young men and women straighten out their lives through his unarmed combat classes.

On Saturday night, Mirjavadi (6-1) won't be pulling any punches, however. He meets Keith Sterly (6-0) of Petoskey in the main event of the evening in a five-round heavyweight clash at the Palace. Free Press sports writer Mike Brudenell caught up with Mirjavadi, who operates "Mirjavadi Mixed Martial Arts," this week.

Q:You're a family man, with a young son and daughter. What does your wife think of you competing in the world of MMA?

A:"Selina loves it. She was a very high-level gymnast at CMU. We met in a bar at Mt. Pleasant. She was a waitress and I was a bouncer. She thinks gymnastics are more dangerous than cage fighting."

Q:You help kids in the Traverse City area. How?

A:"The court there called me and wanted to know if I'd take some juvenile probate kids. I thought it was a good idea -- keep them off the street. They all come in thinking they're street-fighting punks and know it all. I keep them working hard. They're too tired after training to cause any trouble. It's great to watch their self-esteem grow every day. I take a lot of pleasure out of doing this. It's a 10-week program. The city wants to keep it running."

Q:What did you do after college?

A:"Dabbled in some teaching and personal training. But I always wanted to be an MMA fighter. I didn't watch cartoons as a kid. My dad and I would watch Bruce Lee movies. I did some boxing and bodybuilding but just wanted more of an adrenaline rush. In 2007, I moved to Oregon and trained in Portland, which is the home of MMA. I learned so much there. The gym I trained in -- Impact Jujitsu -- had 400 members."

Q:When did you return to Michigan?

A:"This year. I set up my gym about four months ago. We have 25 hardcore students, and we can take more."

Q:You lost one fight, by knockout. That hurt?

A:"More than you can imagine. The guy was a former college wrestler. He was 6-8 and 300 pounds and had been with the Kansas City Chiefs. I lost my composure for just a moment and woke up on my back. Losing really hurts -- more mentally than physically. I couldn't take a phone call for two weeks. I was very upset. Losing, to me, is like catching my wife in bed with another man."

Q:You're taking on another tough guy Saturday, a former college grappler who weighs around 265. Worried?

A:"He's got size, he's strong, and I appreciate him taking the fight. But someone is going to be in a lot of pain at the Palace, and I'm hoping it's him. I like to bang it out, but I'm comfortable taking it to the ground."