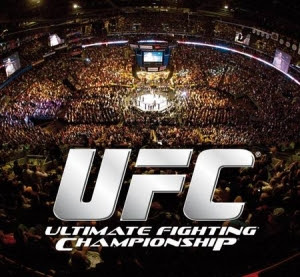 Heavyweight bout:
Junior dos Santos vs.  Shane Carwin
Featherweight bout:
Kenny Florian vs.  Diego Nunes
Heavyweight bout:
Jon Olav Einemo vs.  Dave Herman
Middleweight bout:
Demian Maia vs.  Mark Muñoz
Lightweight bout:
Donald Cerrone vs.  Vagner Rocha
UFC 131 Preliminary fight card
Lightweight bout:
Sam Stout vs.  Yves Edwards
Middleweight bout:
Jesse Bongfeldt vs.  Chris Weidman
Light Heavyweight bout:
Krzysztof Soszynski vs.  Igor Pokrajac
Middleweight bout:
Nick Ring vs.  James Head
Featherweight bout:
Dustin Poirier vs.  Jason Young
Heavyweight bout:
Joey Beltran vs.  Aaron Rosa
Featherweight bout:
Michihiro Omigawa vs.  Darren Elkins
A bout between Junior dos Santos and Shane Carwin will headline the event. The winner of the fight is expected to face off against current UFC Heavyweight Champion Cain Velasquez. Brock Lesnar was scheduled to fight Dos Santos after their coaching stint on The Ultimate Fighter 13, but due to a recurrence of diverticulitis, had to back out of the fight and was quickly replaced by Carwin. Originally, a matchup between Carwin and Jon Olav Einemo was scheduled for this event. Einemo will remain on the card and now be fighting Dave Herman, who was pulled from a matchup with Joey Beltran as a result. Beltran will now be matched up against Aaron Rosa.
Court McGee was scheduled to fight Jesse Bongfeldt, but was forced to pull out due to a torn MCL while training with the Cesar Gracie’s camp.Chris Weidman is set to step in as McGee's replacement.
Rani Yahya was scheduled to take on Dustin Poirier at this event, but withdrew due to injury on May 3, 2011. Jason Young has stepped in as Yahya's replacement.
Anthony Perosh was expected to face Krzysztof Soszynski at this event, but Perosh was forced from the bout with an injury and replaced by Igor Pokrajac.
On May 17, a torn muscle forced Mac Danzig out of his bout with Donald Cerrone. Promotional newcomer Vagner Rocha is set to replace Danzig.
UFC newcomer Dave Herman was originally slated to face Rob Broughton at this event, but Broughton was later replaced by Joey Beltran, who was later replaced with Jon Olav Einemo since Carwin replaced an injured Lesnar.
Expect a bigger crowd and more fan access to the fighters when UFC returns to Vancouver in early June.

The official announcement that UFC 131 will be held at Rogers Arena on June 11 will be made next week.

“You don't make it official until all the i's are dotted and the t's are crossed,” Tom Wright, the UFC's director of Canadian operations, said Tuesday. “We still have some contractual things to work out between the city and Rogers Arena.

“I am very confident we will get that done.”

Vancouver hosted its first UFC card last June. It attracted a soldout crowd of over 17,000 and produced a gate of US$4.2 million.

“We will definitely be back,” UFC president Dana White said after UFC 115. “No doubt about it.”

Wright said this year's event will be enhanced by some of the lessons learned last year.

“We always know we can get better,” the former CFL commissioner said during an interview in a downtown hotel lobby. “In terms of the actual experience for our fans, I think we will do some tweaking on how Rogers Arena is set up.

“In terms of the actual week leading up to the fight, we might make some other changes to allow more of our fans . . . to be engaged more with our fighters and get more up close and personal with them.”

Lesnar made headlines last year when he criticized the Canadian health-care system, saying it was like something found in a Third World country.

Lesnar had been taken to hospital after collapsing during a hunting trip to Canada. He was later diagnosed with diverticulitis.

Vancouver city council voted in December 2009 to approve a two-year trial period for UFC. Concerns over insurance issues had to be settled before the first event proceeded.

“The conditions of the test period have not changed,” Wright said. “The same levels of insurance that were in place for 115 will be in place for 132.”

The UFC is also negotiating what cut of the gate the city/local athletic commission will get. It's believed the UFC paid out $1 a ticket last time.

As soon as the June fight is finished, talks will begin about returning to Vancouver for more events. There's even the possibly of staging a card at the refurbished B.C. Place Stadium.

The downtown facility is undergoing $565 million in renovations, including a retractable roof.

“Is that possible down the road? Sure it is,” said Wright.

Some 55.000 tickets have been sold for UFC 129 at the Rogers Centre in Toronto. The April 30 card has shattered the North American attendance record for a mixed martial arts show.

The previous record was UFC 124 in Montreal, which drew 23,152 to the Bell Centre in December.

UFC officials want to judge the success of the Toronto event before committing to another large venue.

When B.C. Place re-opens this fall it will have a seating capacity of around 54,000 for football and a soccer configuration of around 20,000.

“We hope by the end of the April 30 event we will be successful in demonstrating the experience of a big football-baseball stadium for our fans,” said Wright.

“If it is as successful as we hope it will be, then the opportunity to go into a B.C. Place is something we would look at.”

If UFC does come to B.C. Place it probably won't be an open-air event. The roof would need to be closed to hang equipment, Wright said.

UFC has committed to hold three major events in Canada each year, with cities lining up to host cards.

“I can tell you I have had conversations with the folks in Calgary and Edmonton and Ottawa,” Wright said. “There is lots of opportunities for us to take our fights in different cities.”

Next year UFC hopes to develop a Canadian fight series that would stage cards in cities like Halifax, Quebec City, Regina and Winnipeg. The Canadian series would serve as a stepping stone for fighters hoping to advance in the sport.

“That would take our shows into those smaller communities and give opportunities for up-and-coming fighters to have a chance to show their wares and demonstrate their skills as they build up their repertoire,” Wright said.

Another goal is to work with the B.C. government to establish a provincial athletic commission to oversee MMA events.

Currently, the provincial government has given the decision-making power regarding regulating professional fighting to municipalities. That means rules and regulations can vary from city to city.

“There isn't a provincial athletic commission that regulates the sport,” said Wright. “That's a fundamental change we would like to see happen.”

Overall, Wright said UFC is excited about a return to Vancouver.

“The city welcomed us.”

Ultimate Fighting Championship (UFC) heavyweight contenders Brock Lesnar and Junior Dos Santos are currently busy filming season 13 of the UFC's reality show "The Ultimate Fighter." Once the show is complete, the two coaches will face each other in a heavyweight elimination bout, with the winner moving on to face current UFC heavyweight champion Cain Velasquez.
The UFC made the fight official earlier this week, announcing on the UFC Ultimate Insider that the bout between Lesnar and Dos Santos will take place on June 11th at the Rogers Arena in Vancouver, British Columbia.
Velasquez is currently rehabbing from surgery to repair a rotator cuff injury he suffered when he defeated Lesnar for the UFC title in October of last year.
The loss to Velasquez was Lesnar's last bout; he was stopped at  4 minutes 12 seconds of the first round, with the TKO win going to Velasquez.
Junior dos Santos is coming off a three round unanimous decision victory over Roy Nelson in August of last year. The Nelson victory was the seventh straight win for Dos Santos.
No other bouts are official for UFC 131 at this time, but heavyweight competitor Shane Carwin has posted on his website that he expects to be on the card, however no fight has been confirmed for him at this time.