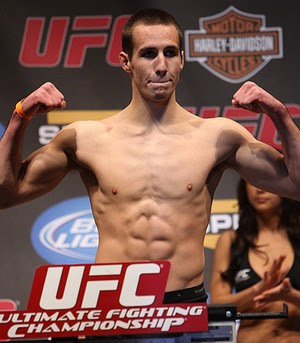 Rory MacDonald, of Kelowna, B.C., is coming off an impressive decision win over Nate Diaz at UFC 129 in April. (Darryl Dyck/Canadian Press)
Canadian welterweight Rory (The Water Boy) MacDonald has been matched against Mike (Quicksand) Pyle at UFC 133 in Philadelphia on Aug. 6.


MacDonald (11-1) is coming off an impressive decision win over Nate Diaz at UFC 129 in April. The 21-year-old from Kelowna, B.C., currently fights out of Montreal.

Strikeforce welterweight champion Nick Diaz says he will stick with MMA rather than try his hand at boxing.

"Nick's been working really hard to get to this point in his MMA career and it wouldn't make sense for us to make that transition into boxing right now," Cesar Gracie, Diaz's manager, said in a release. "If this were a couple months ago or if certain fights had played out differently, we'd definitely be ready to go into boxing, but that's not how it played out."

There has been speculation that Diaz could face UFC welterweight title-holder Georges St-Pierre.