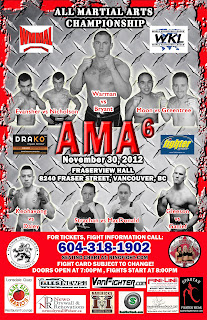 All Martial Arts 6 (AMA 6) was held on Friday, November 30, 2012 at the Fraserview Hall in Vancouver, BC. Videos coming soon!

4 Muay Thai Super Welterweight: Lute Ganeif (WKX Surrey) Defeated Colin Butts (Dirtnap MMA Port Alberni BC) Ganeif wins by Butts going down and not being able to get up for the referee’s 10 count at 1 minute 28 seconds of round 1, if only by a hair.