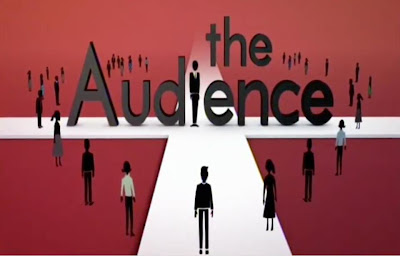 
Trailer for the UK version of "the Audience":

ABOUT THE DOCUMENTARY: The show is a transformative social series. Each one-hour episode focuses on one individual who is struggling with a life-changing decision and is at a difficult crossroads in his or her life. For one week, the individual is accompanied by 50 insightful people from diverse backgrounds. They put their heads together, debate the dilemma, and come up with the best possible solution. At the end of the week, the group presents its considered, collective, and thoughtful advice to the individual.
We all know many minds are better than one when it comes to solving complex, life-changing problems. Sometimes, the best solutions come from the ‘wisdom of the crowd’.
The sport of MMA is rapidly gaining popularity and traction within the Lower Mainland.  Our city is home to many rising stars -- and with individual success comes the question of whether or not to continue moving up in the sport.  Fighters often are faced with questions such as:
Should I quit my day job to train full time and go pro?
Should I rely on fighting as a primary source of income in the future?
Should I spend my free time training instead of with my friends/family?
Is there anything else in my life that would be as fulfilling as victory in the ring?
We are very much hoping to explore on our show this crossroads that comes in every prospective professional fighter's journey to success.  We would love to be able to showcase Metro Vancouver's MMA community on a national level as well.
Please use this email address: theaudience@forcefour.com to be part of the Audience Canada.
Publié par Ben Mehdi