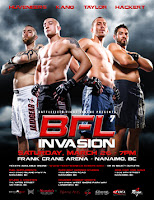 It was announced earlier on today that Denis Kang (33 - 12 - 2- 2 NC ) has signed a multi fight deal with Korean ROAD FC.
And if like us, you feared that it might interfere with the biggest Pro MMA card in BC since UFC 115, fear no more BCMMAA.COM is here!

Below is a statement from the head honcho at Battlefield Fight League, Jay Golashni:


...we just have a one fight deal with kang and his contract states that he can't take any fights before his current fight, so it does not conflict with his current deal with us in any fashion...

Visit the link below for the full fight card of BFL 7:
http://www.bcmmaa.com/2011/01/battlefield-fight-league-7-invasion.html