A+ A-
Print Email
CLICK HERE FOR THE RESULTS
Headliner falls from BFL 7 Fight Card (Nanaimo, BC) – Denis Kang
Kang’s long awaited return to fight on BC soil has been upset. Kang was scheduled to fight Jesse ‘JT Money’ Taylor at BFL’s first Pro/Am fight card in Nanaimo BC. Suffering from an upper body injury, Kang has been instructed by doctors that he cannot fight next week and his match in Korea is currently in serious question.
However, it’s not all bad news. Dennis Kang will still make the trip from Montreal, QC to attend BFL 7(Nanaimo, BC) as a featured guest and will meet fans and sign autographs.
Jay Golshani, BFL President had this to say on the matter:

“We got the news yesterday from Kang that he is definitely out for his fight on the 26th due to an injury.  We tried the most logical replacements in Jason Macdonald, David Louisou, Kalib Starnes, Joey Villasenor, Terry Martin, Joe Dirkson, Thiago Goncalves, Jordan Mein, DrewMcfedries and Gerald Harris and they are all unable to take this fight for either contractual obligations or other fights scheduled in the same timeframe.

We hate to have mismatches headlining our fight cards, and we try tostay away from it even if it’s a last minute replacement.  Since most ofthe top 85ers outside the UFC can’t fight Taylor on short notice, we have decided to ask Taylor to step out of his weight class and fight B.C.’s ClayDavidson (5-2) from Toshido at a catch weight of 202 pounds.

We believe that with the size advantage and Clay’s ground game, this is the mostlogical replacement and stylistically makes for an interesting match up.Denis Kang will be back headlining Battlefield 8 in Nanaimo B.C. on May28th, and all the fans who are attending this event will receive 15%percent off the May 28th event headlined by Kang.  (They have to keeptheir ticket stub and they will get the exact same seat for the next event at a 15% discount.)  Denis kang will still be making  the trip down from Montreal on March 26th to meet the fans and the media.” 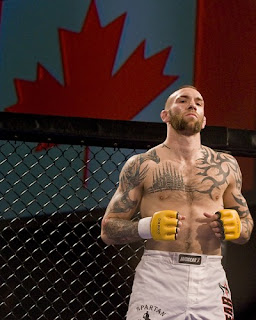 “Huveneers is coming off a huge win over Hinchliffe to become the TFC champ and he hasn’t lost at Middleweight in over 5 years. Hackert has huge wins over Melnyck, Dan MacIver and Ryan Janes, these guys are both top level Middleweights so its time to make this fight happen.” Said Battlefield President Jay Golshani.

“We got guys like Ryan Chiappe who vacated his King of the Cage Belt, now Huvenners who is the current TFC champ, and up and coming young stars like Hackert and Matt Baker all in our Middleweight division. We are going to see top local guys battle it out to see who is ready to take the next big step to face our headliners like Denis Kang and Jesse Taylor. We are different than most of our competition in the sense that there is no gyms going like 10-1 within our organization because of hand picked fights, we don’t feed one of our headliners easy matchups that stylistically its very hard for them too loose just to build them, at this level these kind of tactics are unacceptable . We are going to have legit fights in our organization, and our top guys will all be legit and they earn their rankings in a proper manner. Huveneers/Hacket and Kang/Taylor are two clear examples of 50/50 fights to top our fight card.”

Ken “The Hitman” Tran, who is a member of Franco Kickboxing and Pankration, has agreed to a multi-fight deal. He jumps into the mix by squaring off against Marcus ‘lelo’ Aurelio on Saturday March 26 From the Frank Crane Arena in Nanaimo, B.C.

“My focus and goals in the fight game is to entertain as many people as I can. With a style that screams love me or hate me I will guarantee that you will remember me. I have accomplished almost everything I have wanted to in muay thai facing world class opponents, winning titles, and travelling the world. Now I feel I need to step up and prove to myself and the world I can be an MMA champion too. Thanks to battlefield fight league, I now have that opportunity to make that happen and am very excited and grateful.” Stated Tran.

The 27-year-old has been away from the MMA scene for 5 yrs due to an injury that sidelined him from grappling. Since then he has only lost 1 fight in his last 13 muay thai kickboxing fights. Tran is now back to grappling and wrestling and his focus is squarely on taking his abilities in the cage to a higher level. He’ll get a good test of his game against Aurelio, who is a highly touted prospect.

“These guys are arguably the 2 most exciting fighters here in B.C. Ken Tran has over half a dozen highlight real KO’s to his credit, Aurelio has the biggest KO in MMA history with over 1.5 million hits on YouTube. Tran probably has more MMA experience with fights against guys like top UFC fighters Rory MacDonald, but stylistically this should be a great fight. Tran is a very good technical striker going up against Aurelio who is a very high level, heavy hitting capeoira expert. Its hard to say who has the edge in the the standup this fight, but its safe to say both these guys will keep it standing.” Stated Battlefield president Jay Golshani.

Aurelio, who also recently inked a multi-fight contract to join the Battlefield Welterweight ranks, echoed his high anticipation for the bout.

“He’s a tough opponent. I’ve seen his footage and he definitely has excellent standup, but I have a lot of unorthodox strikes and im gonna come at him with things he has never seen before. I’ll be there on March 26th to throw down. There is no doubt in my mind that our fight will be the fight of the night.”

Graham Spencer (6-1) will square-off against David Scholten (7-4) in a main-card encounter. This fight which features 2 of British Columbia’s top 5 featherweights could have implications on Battlefield Fight League’s featherweight title picture.

Spencer is fresh off a decisive three-round victory over Mukai Maromo-a fight he dominated by mounting Maromo on numerous occasions and raining down his trade mark ground and pound. Coming off the fight, the Nanaimo Native signed a three-fight contract with Battlefield Fight League which kicks off with his clash against Scholten.
Scholten, meanwhile, will be looking for a bit of redemption coming into the fight. Scholten was last in action fighting for the King of the Cage title, a fight which he suffered a 2nd round loss to top Canadian Featherweight Nick Denis. That setback ended a three-fight winning streak for the 34-year-old, Vancouver, B.C, product.

“This is my fight-my year. I am finally fighting at Featherweight, I feel much better and stronger in this weight class. Spencer is one of Canada’s top featherweights and a win over him will put me right in title contention.” Said Scholten.

“Spencer-Scholten is a huge fight in our Featherweight division. Spencer wants to redeem his only career loss against Mike Adams. Many believe that fight was somewhat controversial, so if Graham goes out there and dominates a guy like Scholten I don’t see any reason why Adams would not give him a rematch. If Scholten wins, he’ll probably get the winner of Capdeville/Albrecht later on in the year so this fight is huge for both these guys. We got guys like Hardeep Singh thinking of moving up to the 45s also so there is a lot of interesting fights in the horizon for the Featherweights, we just gotta wait and see how these guys do in March.” Stated Battlefield President Golshani.

Battlefield Fight League 7 “Invasion” will be headlined with a matchup between Denis Kang and Jesse Taylor. Tickets for “Invasion” are available now through http://www.ticketscene.ca/events/3460/.

Battlefield 7: Invasion, which will be held at the Frank Crane Arena in Nanaimo B.C., features the following matchups: