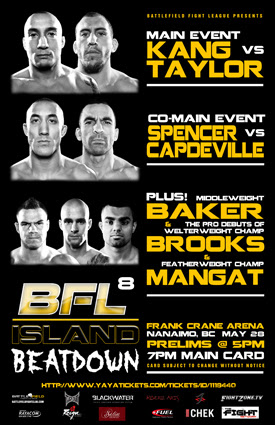 For example, while Denis Kang was cutting his teeth in Mixed Martial Arts (MMA) as a young man in Vancouver, British Columbia learning the fundamentals of Brazilian Jiu-Jistu from world-renowned instructor Marcus Soares in the late 1990’s, Jesse Taylor was spending those very same afternoons sweating his way through grueling high school wrestling practices in nearby Poway, CA.

Next, in the early 2000’s, as Denis Kang cut a devastating 9-0-1 swath through the international-heavyweight field of South Korea’s SpiritMC, Jesse Taylor was busy becoming a 2xNCAA Junior College All-American and a 2004 California State Champion with a near-perfect record. Then, in the mid 2000’s, just as Kang put the final touches on a devastating 6-1 run through Japan’s PRIDE Fighting Championships, Taylor was preparing for his own big-break in Mixed Martial Arts (MMA) as a cast-member on season 7 of *The Ultimate Fighter*, where he advanced to the finals with terrifying ease.

Both men seemed on top of the world. Then, a volatile combination of personal tragedy for one, poor decision making for the other, and some plain, old-fashioned hard-luck for both culminated in an underwhelming combined 1-3 run through The Ultimate Fighting Championships for the pair in the late 2000’s. That string of set-backs left both men headed straight to the proverbial drawing boards.

However, being the true warriors of the cage that they are, both Kang and Taylor have resurrected their fighting careers since 2010 and are now once-again making the necessary preparations for an all-out assault on the stronghold of the best middleweights the Mixed Martial Arts (MMA) world has to offer.

First though, these two combatants, fighters cut from such similar cloth and who have shared so much more in life than either man may rightly know, will finally meet one another at Battlefield Fight League 8. Their planned match at (Battlefield Fight League 7) BFL7: “Invasion” fell through due to injuries to Kang. On that night, Taylor remained in the card’s main event – gamely stepping up in weight, but still serving up a masterfully mashing three-round decision defeat to B.C.’s tough-as-nails Clay Davidson (5-3).

This weekend in Nanaimo, British Columbia Canada Denis Kang seeks to even the score for B.C. and Jesse “JT Money” Taylor aims to hand out yet more ground’n'pound punishment, as both attempt to use the others recent remarkable successes as a potential launching pad back to the very pinnacle of a sport that each has made their life’s work.

Only one of these tremendously skilled prize-fighters can walk away a winner at Battlefield Fight League 8 (BFL8).

Only one can dish out, an “Island Beatdown.”