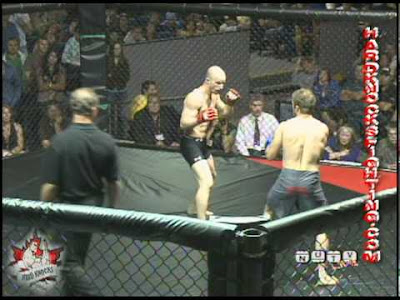 Hard Knocks Fighting Championship is on the cusp of expanding to Prince Albert, as the Calgary-based mixed martial arts (MMA) company is in the process of confirming its debut event at the Art Hauser Centre, tentatively scheduled for late December.
“We are really excited to be here,” said Hard Knocks Fighting Championship CEO Ari Taub while he was in Prince Albert discussing the details of the proposed event. “It is a great community to be in. The arena
Taub, 40, wrestled on behalf of Canada at the 2008 Beijing Olympics and has been entrenched in the grappling sport for upwards of 23 years.
Almost a year after the Games in 2009, Taub sat back and said to himself, “what now?” Well, after some self-reflection and thorough deliberation he decided to create a “grassroots” MMA alternative for fighters of all ages in Western Canada and, after a dogged tussle with Calgary’s courts, Hard Knocks was born.
“I figured it would be fun to do a business that related to sports and MMA,” said Taub, wrestling’s 2007 Commonwealth champion. “It’s the thing that’s going to get the kids off the streets and going to get people into the gym and into an environment where they can learn through their coaches.”
Most sports in Canada have strong youth developmental programs, which MMA still lacks. But Taub and Hard Knocks are striving to remedy the absence of grassroots support MMA receives.
“We are on a march across Canada, we are going to hit Saskatchewan pretty hard this fall,” said Taub. “Our object and mission is to create a grassroots MMA system all across Canada.”
Monumental challenges, Taub said, include developing an up-to-date fighter database consisting of local talent from all cities Hard Knocks intends on visiting.
“We want to get as many local guys on each card as possible,” said Taub. “In P.A. our main goal is to fill the card with P.A. people if we can.”
Once local competitors gain fight experience and build a foundation, opportunities to perform at larger-scale events will potentially arise. And Taub said hopefully rivalries build, culminating with unique future cards.
“We should have P.A. versus Saskatoon at some point, we should have Saskatchewan versus Alberta,” he said.
Cord Crowthers, Hard Knocks manager of marketing and promotions, said that MMA appeals to the masses, as it is a sport involving many disciplines.
“One of the great things about MMA, too, is it is such a non-biased sport. There is men, there is women, there is all races, ages, kids,” he said. “It really spans everything. That is really neat, especially in small markets like P.A.”
Taub’s four kids – two sets of identical twins – are all learning aikido, a Japanese martial art, which his boys started at the age of five. And although MMA is often considered a violent sport, Taub offers an opinion allaying those conceptions.
“I don’t think I want my boys grabbing and pounding other kids, and I am not sure I want them boxing, but I think that when they are younger I want them learning a bunch of moving patterns, and body-awareness skills,” he said. “The object is to get them excited about being physically active and respect for competitors and sport.”
Hard Knocks is hosting its 14th event in Calgary on Sept. 23, leg sweeping its way to Regina on Oct. 7 for its first visit to Saskatchewan thereafter. The Calgary-based company has also made an appearance in Medicine Hat, which Taub said received “glowing reviews.”
Hard Knocks will ride the momentum gained from its Regina card to Estevan for an Oct. 22 show.
There seems to be no stopping MMA and Hard Knocks, whose intentions are to spread the grassroots level across Canada, initially focusing on expanding to British Columbia and Manitoba.
Pending city approval, Hard Knocks has narrowed its options for the first Prince Albert card down to either Dec. 30, or an event for the ages, on New Years Eve.
by Gary Pearson