Menu
Home » »Unlabelled » UFC returns to Toronto for UFC 140 on Dec. 10 at the Air Canada Centre

UFC returns to Toronto for UFC 140 on Dec. 10 at the Air Canada Centre 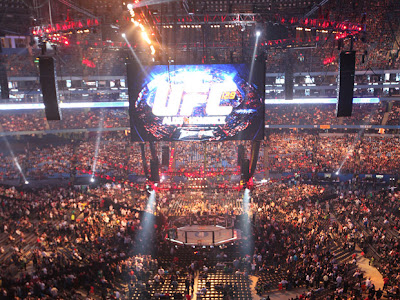 After a record-setting event earlier this year, Ultimate Fighting Championship fans in Toronto are getting an encore performance.

The mixed-martial-arts promotion confirmed Wednesday that UFC 140 will take place at the Air Canada Centre on Dec. 10. It will be the second pay-per-view in 2011 in the Ontario metropolis, after 55,724 fans packed Rogers Centre on April 30 for UFC 129.

"We left a lot of our fans hungry for more opportunities to see our athletes perform live," said UFC director of Canadian operations Tom Wright in an interview on Wednesday.

That event - headlined by Canadian superstar Georges St-Pierre defending his welterweight title against Jake Shields - set both a North American MMA attendance record, and also a live gate record ($12,075,000). The previous attendance record of 23,152 was set at UFC 124 in Montreal last December for a main event between St-Pierre and Josh Koscheck, while the gate record of $5.397 million had stood since UFC 66 in 2006, when Chuck Liddell beat Tito Ortiz in Las Vegas.

No main event or undercard bouts have been decided on for UFC 140, said Wright. He said he leaves the job of building the card in the hands of UFC president Dana White and matchmaker Joe Silva.

"Those guys know what they're doing. I trust those guys implicitly," said Wright.

That said, he does have some strong feelings about what he'd like to see for the return to Toronto.

"I've been lobbying for a championship fight," said Wright, adding that he has "every expectation" that at least one of the company's seven title holders will put his belt on the line at UFC 140. Wright did rule out St-Pierre fighting, since he's scheduled for a title defence versus Nick Diaz at UFC 137 on Oct. 29 in Las Vegas.

The ACC, home of the Toronto Maple Leafs and Raptors, will seat in the neighbourhood of 20,000 for UFC 140. UFC president Dana White said following UFC 129 that while the company was anxious to put on another event in Toronto, it would be too challenging to stage two stadium shows in the same market in one year.

Wright said the ACC and Rogers Centre are both worldclass facilities, and hosting this event at the ACC will allow the company the opportunity to evaluate the fan experience.

"It's all about making sure we take care of our fans," he said.

Wright said that he expects Toronto will be a "consistent stop" in the pay-per-view rotation, hosting an event annually. UFC has held four previous events in Montreal, plus two in Vancouver. Company officials in the past have said they are keeping in mind cities such as Calgary, Edmonton, Winnipeg and Hamilton for future events.

UFC 133 returns to payper-view on Saturday from Philadelphia, where in the main event former light heavyweight champions Rashad Evans and Tito Ortiz square off. In another bout on the main card, B.C. native Rory MacDonald takes on Mike Pyle in a welterweight contest.
BY DAVE DEIBERT