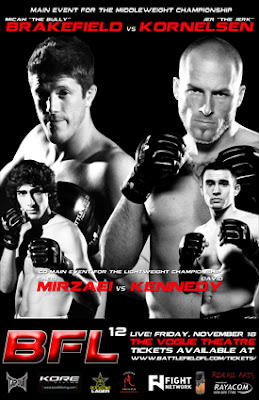 Battlefield Fight League 12 (BFL 12) will be held at the Vogue theater on Granville street in Vancouver B.C. on November 18th, 2011

As Battlefield Fight League 12 [Vancouver, B.C.; November 18, 2011] continues evolving into possibly the region’s most stacked amateur fight card to date, a fantastic featherweight scrap has just been added to the main card. It will be a showdown between long-time BFL standout Chris Day (7-4) and a current champion from another promotion in undefeated Emilio Ditrocchio (5-0).

Their respective paths to this showdown could hardly have been more
different, but this match-up has all the makings of an all-time classic.
This event will also be the first BFL card ever televised live on The
Fight Network.

In the BFL’s short history, no fighter has personified the MMA axiom “don’t leave it up to the judges” quite like natural-featherweight Chris Day.

He first appeared in the main event at BFL 1 on May 15th, 2010, against physically larger veteran lightweight Tak Sasaki (0-1 PRO) in a split-decision loss that instantly caught the attention of all in attendance. Though visibly undersized, Day brought the fight to Sasaki until the final bell, convincing many in attendance that Day should actually have won.

Little could anyone know at the time, this pattern would, for a time at
least, become the hallmark of Day’s Battlefield Fight League career:
thrilling and incredibly close fights against top fighters that never
seemed to break his way.

In fact, despite entering the BFL a perfect 6-0, Day went on to lose
razor-thin decisions to current BFL professional and former featherweight
champion Gary Mangat (1-0 PRO) and current featherweight champion Jeremy
Kennedy (5-1) in two of his next three outings – with a TKO due to injury
sandwiched in between. To break this vicious cycle, Day tried his hand
again at lightweight at BFL8 where he finally picked up his
richly-deserved first Battlefield win over Eli Wyse (4-2).

Meanwhile, the story for any relatively-untested, undefeated fighter
remains the same for Emilio Ditrocchio: a fierce debate about whether his
flawless record is more a product of his competition’s weaknesses or his
own strengths. The surest way to know, of course, is for young champions
like Ditrocchio to step out of their comfort-zones and into the breach
against the very best amateur talent available.

To his credit, Ditrocchio, who is an assistant instructor, as well as a
star pupil, at Vancouver’s Posener’s Pankrationr and is currently riding a
streak of four consecutive first-round finishes, including a win by arm
bar back at BFL4, has done just that by re-entering the fray against BFL’s
featherweight elite.

Especially considering a fellow champion from Emilio’s most recent
promotion will fight for the vacant amateur lightweight title at BFL12,
Ditrocchio no doubt feels ready for a shot at the current BFL
featherweight champion, Jeremy Kennedy. But he must wait at least until
after current #1 contender Cam Deleurme (6-2) has his crack at the BFL
hardware.

And so it is that this main card fight at BFL12 between battle-hardened
Chris Day and high-flying Emilio Ditrocchio has all the apparent makings
of a #1 contender’s bout to determine who will face the winner of Kennedy
vs. Deleurme.

Both Day and Ditrochio possess stunning ground acumen, but neither is shy
about swinging limbs or leather, either, which may come in handy since
neither has ever been submitted in competition.

Regardless of the roads we take in life, hard work and consistently facing
tough challenges tend to bring about great opportunities sooner-or-later;
both Day and Ditrochio have clearly embraced that mentality, but only one can seize victory at BFL12.