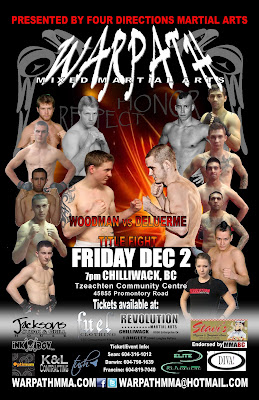 Click Here for the Results of WarPath MMA 3 in Chilliwack BC: http://www.bcmmaa.com/2011/12/results-warpath-mma-fights-in.html


CHILLIWACK MIXED MARTIAL ARTS FIGHTERS AND FANS ON THE WARPATH

WarPath MMA is expecting hundreds of enthusiastic sports fans to enjoy 16 MMA fights, one Muay Thai Kickboxing fight and one boxing match.  Athletes from all over the province, including seven local Chilliwack fighters, have been training for months to prepare for this night.

Alongside seven local Chilliwack fighters, there will be mixed martial arts athletes from all over the province.  For two of them in particular, TJ Woodman from Avalanche MMA in the Yukon Territories and Cam Deleurme from RDC Jiu Jitsu Academy in Kelowna, the spirit of MMA will be strong as they dig up courage, strength and determination to bring home WarPath MMA’s first ever Championship Title Belt.

WarPath MMA is organized by the owners and operators of Revolution Martial Arts. Darwin and Francine Douglas, Sean and Lisa O’Halloran and Harley and Racheal Chappell are local Chilliwack families interested in promoting and supporting martial arts; it is the fastest growing sport in North America and, according many Chilliwack fans and fighters, should be the sport of choice for all athletes.