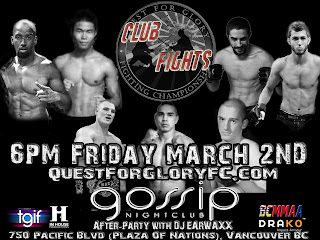 
Vancouver’s first MMA show held in a cage on the dance floor of Vancouver's biggest night club GOSSIP NIGHTCLUB.
Christiaan Allaart from Infinity MMA in Langley BC is  set to go against the currently Undefeated WCP Featherweight Champ Emilio "Get Money" Ditrocchio from Posener's Pankration. Christiaan Allaart might be relatively new to competing in the octagon but he holds a record of 10 wins and 3 losses in Kickboxing (which is very similar to Ditrocchio's Muay Thai record) as well a recent win over the original opponent (Cam Deleume) at a Brazilian Jiu-Jitsu competition. These two well-rounded featherweights mean business as the Quest For Glory Fighting Championships Title is on the line.

Shinji "Shinobi" Morito from Franco's Pankration in Vancouver BC has stepped up on short notice to test Rico "Beast Mode" Brinson from Mamba MMA in Abbotsford BC. Morito received a silver medal at the Muay Thai tournament in the 2011 Western Canadian Martial Arts Championships while Brinson has received the Gold medal in last year's Jiu-Jitsu tournament of the same organization. Franco's Pankration is know for producing well-rounded fighters but most would speculate that Shinobi will be looking to keep the fight standing  for a knock out finish, while Beast Mode's strategy should be to take the fight to the ground and apply a submission. This is classic match up of a striker versus a grappler is sure to produce a mesmerizing battle of wills.

MMA, hot girls, drinks and dancing all combined under one roof for one night!
Tickets starting at only $40!!
VIP Seating $99 (limited availability, tables on the stage)
Doors open at 6 pm
Visit the link below to reserve your tickets online:
http://www.ticketzone.com/1114647-Quest-For-Glory-3-CLUB-FIGHTS-tickets/Quest-For-Glory-3-CLUB-FIGHTS-Vancouver-Gossip-Night-ClubInHouse-Productions-January-27-2012.html