Huveneers vs. Hinchliffe at Battlefield Fight League 15 (April 27 in Nanaimo BC) 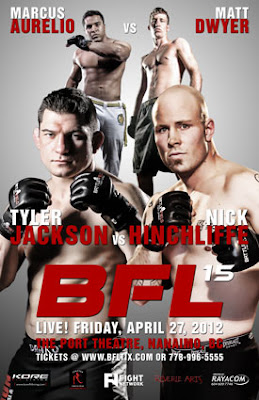 Following an injury to his original opponent, current welterweight and returning hometown hero Nick “The Juggernaut” Hinchliffe (18-8) will square off in a 180lb. catchweight rematch against middleweight Bastien Huveneers (9-3-1) in the main event of Battlefield Fight League 15 on Friday, April 27th .

No matter who stood waiting across the cage, the long-anticipated return of Hinchliffe to Nanaimo’s Port Theatre was already garanteed to be a special night for fighter and fans alike.

Despite always training at the Vancouver Island city’s Impact MMA, Hinchliffe was last seen competing in Nanaimo nearly four years ago. Since then his career has been on a MMA rollercoaster ride that saw him compete in numerous main events, several title fights, and against some Canada’s best fighters, including Rory MacDonald (12-1), Kalib Starnes (12-7), and Ryan Ford (17-4), all while going an impressive 8-5 with five finishes.

Known for his powerful strikes and crafty, often unusual, chokes, Hinchliffe already owns a record many professional MMA fighters would proudly call their own. He looks to begin another new phase of his still-young career with his return to Nanaimo at BFL15! One way to do that is by avenging a close, recent loss, an opportunity “The Juggernaut” now has against Vancouverite-by-way-of-Belgium Bastien Huveneers.


Battlefield Fight League 15 will take place on April 27, 2012 from the Port Theatre in Nanaimo, B.C.

The mainevent will be a matchup between Nick ‘The Juggernaut’ Hinchliffe and Bastien Huveneers. The co-mainevent will feature a #1 contenders welterweight fight between undefeated Matt Dwyer and Capoeira superstar Marcus Aurelio. This card will also feature the return of Jacen Brooks to MMA action. Check this page on a regular basis for the updated fight card.