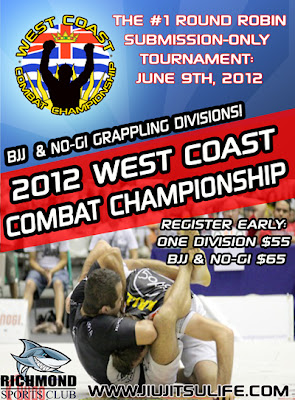 The 2012 West Coast Combat Championship takes place on June 9th, 2012 at the Richmond Sports Club located at 2251 No 5 Rd  Richmond, BC right off Vulcan Way. This Round Robin Submissions-Only tournament has been for years the most exciting tournament on the West Coast, so don't miss out!

The weight-in starts at 9:00am and all fights start at 10:00am sharp.
Early Registration is now open and ends May 31st, 2012. The cost until then is:
Only $55 including tax for one BJJ or No-Gi Grappling division
Only $65 including tax for both divisions
Spectator passes (12years and older) are $6 each

THE OPEN WEIGHT DIVISIONS ARE OPEN TO ALL COMPETITORS AND ALL LEVELS,ALL MALE COMPETITORS WITH MORE THAN 3 YEARS EXPERIENCE ENTER BJ16 OR NG16. The goal in this tournament is to gain as much tournament experience as possible especially for novice competitors. Therefore, the goal for all competitors should be to complete all matches.

Adult/Teens should expect up ten matches and Juniors should expect up to five matches in the BJJ and No-Gi Grappling divisions but we reserve the right to limit the amount of matches at anytime.
All Competitors must wear tight fitting gi (BJJ Only) or clean board shorts and T-shirt or rash guard all in good conditions. Attire with inappropriate language or imagery is not acceptable.

All matches start from standing. Competitors who move outside the border when standing can (at the discretion of the referee) be restarted in the centre of the mat.

If fighters move outside the area while on the ground (both fighters have at least one knee down) the action will be stopped and they are moved back to the centre of the mat in the last position they were in before going out of bounds. Deliberately or repeatedly moving outside the border will be considered as stalling and penalized accordingly.

Ways to win
By Submission (physical and verbal), medical stoppage or by referee stoppage (due to submission, injury or rule infringement).

NOTE: The referees will break up fights if a competitor is in any Joint lock and does not try to escape effectively right away, but it is up to the competitor to tap and continue to compete. It is up to the competitor to tap when he is in a choke submission.
Match Format
All matches are one 4 minute round with a minimum of 30 seconds rest between fights. Please remain in the competitor area. If your name is called and you are not responding, we will move on to the next fight. After the fight ends we will call your name again. If you are still not responding your opponent will be awarded an automatic win. Tell someone if you have to go to the washroom.
Scoring system
Fighters fight in a round-robin format within their weight category. 3 points are awarded for a win, 1 point each for a draw (i.e. no referee stoppage, or no submission) and 0 points for a loss. If you win a match make sure to see the score keepers to make sure that you are awarded the points. At the end of the round robin the fighter with the highest scores wins.
Illegal Techniques
Prohibited Techniques are:

-Any leg attacks in the Junior divisions 12 years and younger
-striking or kicking
-biting, fish hooking, gouging (including chin in eye socket, thumb in armpit) or hair pulling
-heel hooks, figure 4 toe holds or other locks designed to apply twisting force to the knee
-neck cranks or compressions (w/out forearm or wrist on throat)
-small joint manipulations (fingers, thumbs and toes as well as holding 3 fingers or less)
-pressure points on head, face or throat
-wrist locks, elbow or knee slicers
-Excessive Aggressiveness:

Committing 2 fouls in one fight result in an automatic disqualification from the match. However, the referee has the discretion to disqualify immediately after a serious, dangerous or deliberate foul. Important: If your foul or illegal technique causes your opponent to tap you loose the match.
The referee has the discretion to stop the fight at any time when he thinks that:

-a competitor uses any of the illegal techniques listed or commits any other foul. The referee has the discretion to give the competitor one warning or to disqualify him/her right away
-a competitor is not protecting himself properly and/or is in a submission hold that may put his/her health at risk in any way
-a competitor and/or his coach acts in an unsportsmanlike fashion and/or tries to seriously hurt his opponent. This competitor will be disqualified.
-it is necessary for safety reasons. The referee's decision is final
FIGHT EVEYONE- SUBMIT EVERYONE

ALL DIVISIONS ARE FOR COMPETITORS WITH LESS THAN 3 YEARS EXPERIENCE UNLESS NOTED OTHERWISE
ALL BJJ GI DIVISIONS INCLUDE UNIFORM.
WE RESERVE THE RIGHT TO MOVE JUNIORS IN BETWEEN DIVISIONS

This is the best run tournament on the West Coast- read to what former competitors say:

"HAVING COMPETED IN THIS TOURNAMENT 5 TIMES I CAN TELL YOU THAT THIS IS NOT ONLY THE BEST TORNANMENT AROUND FOR EXPERIENCE BUT ALSO THE MOST FUN! SINCE YOU KNOW EXACLTY WHO YOU ARE FIGHTING AND HOW OFTEN YOU WILL FIGHT THERE IS A LOT LESS PRESSURE AND THE ATMOSPHERE IS UNBEATABLE!" Jason Gagnon- Vancouver

"ALL WEST COAST RUN TOURNAMENT ARE THE DEFINITION OF HOW LOCALS COMPETITIVE GRAPPLING TOURNAMENTS SHOULD BE! " Scott Betrand, Maple Ridge

FIGHT EVERYONE- SUBMIT EVERYONE!

Don't Miss The Chance To Test Yourself!
This is the only Round Robin Submission-Only tournament on the West Coast so sign up today!

Please contact info@jiujitsulife.com for any questions. We reserve the right to change the rates, rules, weight divisions and start times any time without notice.