Rory MacDonald will not fight GSP & wants a rematch against Condit 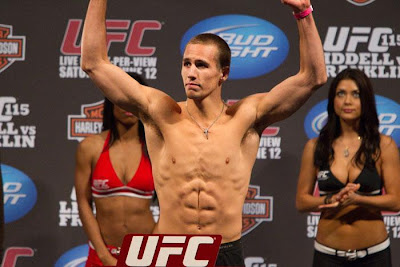 Rory MacDonald (13-1 MMA, 4-1 UFC) again made it clear that he has no intention of vying for the welterweight title as long as his teammate Georges St-Pierre is champ.

But he has a keen interest in the man St-Pierre is scheduled to fight tonight – interim champ Carlos Condit, who beat him in his second UFC fight.

"I'm fighting B.J. Penn, and I plan on beating him," MacDonald said Friday. "We'll see how the fight with Georges and Carlos goes. Either way, I plan on hopefully getting my rematch with Carlos in 2013."


MacDonald and Condit first squared off at UFC 115 in Vancouver, not far from MacDonald's adopted hometown of Kelowna, British Columbia, Canada.

MacDonald said the energy of the almost-hometown crowd "shocked" him into fighting with too much emotion, and by the third round, he was running on fumes. That's when Condit turned up the pace and won a Technical Knock Out with just seven seconds remaining in the fight.

It was the hardest fight to date for MacDonald, who admitted Condit "beat the s--- out of me."

Condit then won bouts against Dan Hardy, Dong Hyun Kim and Nick Diaz to secure the interim title and a shot at St-Pierre, who's the most notable member of the Tristar Gym in Montreal where he and MacDonald train.

MacDonald said he'd be open to coaching "The Ultimate Fighter" opposite Condit. For now, though, his attention is on his fight with Penn, which takes place Dec. 8 at UFC on FOX 5 in Seattle and serves as the event's co-main draw.