A+ A-
Print Email
Received an email about this yesterday: 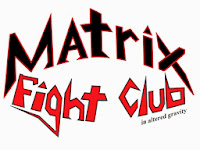 A Matrix Fighting Event. Watch and enjoy the first fights recorded in altered gravity. As chaos erupts in the sky above.

Welcome to our Matrix Fighting Event in altered gravity.

We will alter gravity through the use of a large aircraft flying parabolic arcs. And then fights will erupt. As we record them with the goal of increasing their entertainment value.

Check out this youtube video (jump to 3:12 (Martian) or 4:40 (Lunar)) to see how gravity will impact the fighters. Please note that 90% of the fight time will occur in Martian and Lunar gravity. And not zero gravity (5:43), so that the fighters can actually move and fight.

This is a crowdsourced fighting event where the backers pick who's fighting, who wins the fights that go to decision, help select our ring girl, and also pick the fighting style of one out of the three fights. Any fighter that meets the requirements in the fighters wanted section (below) can enter the selection pool. But go to matrixfight.com to tell us what you want to see.

If we fight through hyper gravity, then we propose the following:

If you want to fight in ALTERED GRAVITY.

Then email me at tom@matrixfight.com. And I’ll add you to the selection pool. (But first read the requirements below.)

Just so you know, you’ll be the first to ever fight in ALTERED GRAVITY. Your ticket cost roughly $5,000 (retail value). But we’ll take care of that. You just have to show up and fight.

Must make Welterweight (170lbs) for weigh-ins the day before the fight.
Must have fighting video that I can link to or embed. Because people need to pick the fighters they want to see fight.
Must be physically and medically cleared to fight.
Must pay for travel to and from the flight location (T.B.D. US city).
Must pay for all accommodations (food, hotel, etc.) before and after the fights.
Provide (send to tom@matrixfight.com):

The whole point of this project is to film mixed martial arts fights in altered gravity. With three simultaneous fights, and the majority of the aircraft space occupied by the fighting rings. Creating an adequate solution to filming the event presents a small challenge.

The current plan is to have 3 to 4 cameras on each fight. So that hopefully one camera will be able to provide a perfect shot of the fight that it's recording at all times. Each fight will have a camera mounted on each end to catch the long views. To compliment the end cameras, each ring will have side mounted cameras to help catch all the action. Ideally a high and low camera on both sides of the aircraft to provide different view points and help capture each fight completely. Lastly each ref will wear a helmet cam, as they should consistently be in position to have some of the best views of the fight.

After the fights and during the editing process, we'll produce a finalized edited cut that captures the best possible views of each fight. Once we finalize the aircraft and see what we are working with. Then other solutions maybe implemented if they can improve the final product.

Who's on board?
36 People (rough guess at this time, I think we'll need more fighters):