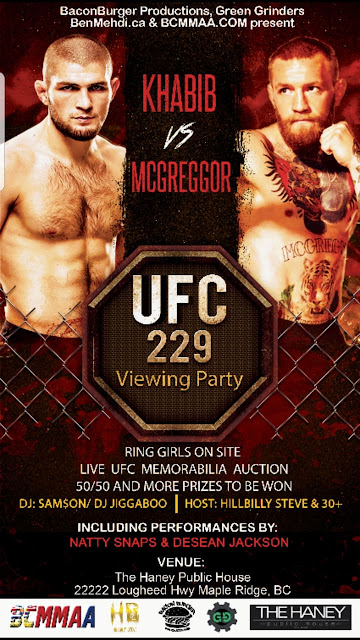 UFC 229 Khabib vs McGregor Live at the Haney Public House in Maple Ridge.

With a stacked UFC card like this you dont want to miss out!
As well as having the fights live we will have many other goodies for you MMA fans
such as live performances and a DJ so we can party afterwords!
we will also have Ring Girls on location,
Authentic signed UFC memorabilia for auction
50/50 draw and more prizes to be won!

Lightweight champion Khabib Nurmagomedov prepares for his first title defense, Khabib will be putting his undefeated record on the line at UFC 229 against Conor McGregor.
McGregor, meanwhile, will make his first trip to the famed Octagon since 2016, where he dethroned Eddie Alvarez to become a simultaneous two-weight UFC champion