A+ A-
Print Email
Click HERE for the RESULTS 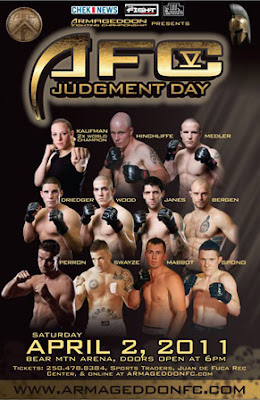 VICTORIA, British Columbia (CAN) – North America’s top female fighter Sarah Kaufman has signed a contract with Armageddon Fighting Championship (AFC 5 Victoria BC). The two time world champion is scheduled to make her return to Canada and, for the first time, fight in her hometown of Victoria BC at the company’s fifth event, AFC 5: Judgment Day on Saturday, April 2, 2011. An opponent has not been determined at this time.

A multiple-time world champion, Kaufman has an aggressive style of striking, from the opening bell she is looking to put her fists to work. Sarah has finished 9 of her 12 wins via (T)KO and one of those an award winning KO slam of Roxanne Modafferi that will live on forever in MMA highlights. 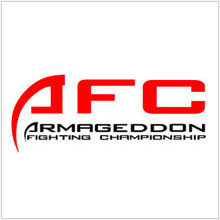 Sarah first captured Strikeforce gold in February 2010 after she dominated Takayo Hashi for 5 rounds, becoming the first women’s bantamweight champion. Under the tutelage of her coach BJJ blackbelt Adam Zugec, Sarah is one of the best fighters on the planet and is looking to continue with her tremendous success thus far.

Kaufman is joined on the AFC card with her training partners Nick Driedger, Connor Wood and Ryan Janes as well as Canadian standouts Nick Hinchliffe, Derek Medler and David Perron for what is sure to be a historic night of fights.

Armageddon FC President Darren Owen had this to say “ I am extremely thrilled to be able to have Sarah fight for us, especially in front of all her friends and family. She has been at all of our events and gets the biggest ovation and now to be able to give our fans what they really want, to watch her compete, just makes sense.”

Based in Victoria, the Armageddon Fighting Championship has quickly become the premier mixed martial arts operation in the province. The organization is broadcast on Canadian combat sports channel The Fight Network, and CHEK TV with events streaming live on GOFIGHTLIVE.tv.

Tickets for AFC 5: Judgment Day are on sale now and can be purchased by visiting the Armageddon Fighting Championship website at armageddonfc.com.


• WHERE: Bear Mountain Arena in Colwood, BC, Canada


Tickets for AFC 5 in Victoria BC are on Sale now


Nick “The Juggernaut” Hinchliffe (17-7, , B.C. #8) Hinchliffe’s opponent at 170lbs. will be well-traveled Tyler “TNT” Jackson (10-7-1) of Revolution MMA who has fought some excellent opponents of late, like Alex Garcia (6-0, LOSS), Derek Gautier (6-2, WIN), and Nathan Gunn (7-2, Split-LOSS). Both Hinchliffe and Jackson have a striking-first mentality, which should produce a highly entertaining scrap, and there remains a strong possibility that another major fight will be added to top the card shortly.