Here are the results from tonight's Armageddon Fighting Championship 7: BREAK OUT (AFC 7) From VICTORIA BC
http://www.bcmmaa.com/2011/11/results-afc-7-armageddon-fighting.html 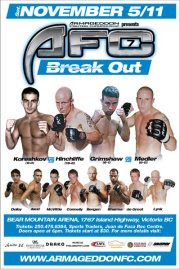 Here are the results from tonight's Armageddon Fighting Championship 7: BREAK OUT (AFC 7) From VICTORIA BC
http://www.bcmmaa.com/2011/11/results-afc-7-armageddon-fighting.html

VICTORIA (BC): Victoria-based Armageddon Fighting Championship has announced the line-up for their seventh event, AFC 7: “Break Out” to be held at the home of the AFC, Bear Mountain Arena on Saturday, November 5th.

For the first time the Armageddon Fighting Championship (AFC) will have a mixture of professional and amateurs on their card.

AFC 7 Features Derek Medler (6-0), a former Toronto Argonaut vs Brian Grimshaw (6-1) in an all-BC main event. Since leaving football, Medler has trained at Island MMA and fought and won at every AFC event to date! Medler has finished all six of his AFC opponents. Like Medler, Grimshaw has finished every opponent he has beaten. He has never seen the second round of a match. Grimshaw is Medler’s most dangerous opponent so far.

In the semi-main event, Nick Hinchliffe (18-8) will make his return to the Island following a controversial loss to Ryan Ford at Aggression MMA 7 in Edmonton. Like Medler, Hinchliffe is a crowd favorite who loves to scrap. In his last fight in Victoria, Hinchliffe defeated Ryan Machan in a Majority Decision. Hinchliffe, who is 4-1 in the AFC cage, will hope to continue his Armageddon success against Russia’s Andrey Koreshkov (6-0) who will be making his North American debut.