An app where MMA fans can truly interact, learn and earn bragging rights based on how much YOU know MMA!

COMING SOON! - Text FIGHTCLUB to the number 20300 to be the first to know when the App Launches! You will also be entered to WIN Official Gear and our Grand Prize... A trip for 2 to see the fights and meet Big John McCarthy!
Big John McCarthy has refereed some of the biggest fights in MMA History for the Ultimate Fighting Championship, UFC, Strikeforce, Bellator, Invicta FC and More! Now he is right at your fingertips with this MMA Fight Fan's Ultimate App!

>> Exclusive Interviews with Big John and our MMA Celebrity Guest Host each month!
>> Lock in your predictions on upcoming fight match-ups from UFC, Strikeforce, Bellafort, InvictaFC and more!
>> Earn Bonus Points by out predicting our MMA Celebrity Guest Host.
>> Bet your friends that on your predictions to earn MORE Virtual Dollars!
>> Use your Virtual Dollars towards the Purchase of Awesome Oficial Big John's MMA Fight Club Gear! 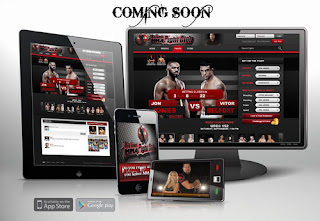